A Changeling For All Seasons 1 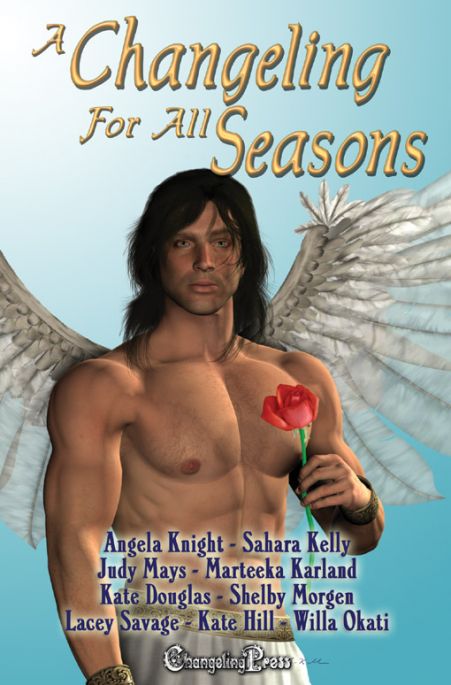 Filled with the unexpected, A Changeling For All Seasons offers something to savor for every palate. From humorous to magical, from Christmas to St. Patrick's Day to the 4th of July, these stories are alight with unbridled lust, sensuous passion, and hot, hot sex, guaranteed to entangle your senses and leave you breathless.

Praise for The Vampire Christmas

"Angela Knight's The Vampire Christmas is an exceptional book. I could not put it down."

Praise for A Christmas Pageant

"Ms. Kelly is a very talented author who has written a heart-warming story of two lonely individuals finding love during the holiday season. Most definitely a keeper!"

"[Judy Mays's] witty dialogue will have you laughing out loud."

Praise for Sealed With a Kiss

"Sealed with a Kiss is a great story with humor, conflict and hot sex. I hope Marteeka Karland revisits Marie and Daxon in a future book."

Praise for My Valentine

"Easily the most emotional, beautiful and unforgettable novella I've read this year, My Valentine is simply breathtaking."

-- Ayden Delacroix, In the Library Review

"The reader will fall in love with Michael and Arien, who is a delight. Destined to be a St. Patrick's Day classic."

"This book enthralled me from beginning to end and I loved it."

"There is enough unbridled passion between the sheets of this book to leave you breathless."

Praise for Chemistry to Burn

Praise for Troll Under The Bridge

-- Phillipa Ann, Romance Reviews Today
This e-book file may contain adult scenes and language which some may find offensive and which is not appropriate for a young audience. Changeling Press E-Books are for sale to adults, only, as defined by the laws of the country in which you made your purchase. Please store your files wisely, where they cannot be accessed by under-aged readers.

A Changeling for All Seasons
Excerpt from A Vampire Christmas
Angela Knight
All rights reserved.
Copyright ©2010 by Angela Knight

Amelia Patton clattered up the beige stairs of the apartment complex, the plastic dress bag hooked over one shoulder. It had been a long shift at the hospital, but the prospect of showing David her purchase had put a bounce back in her step. The gown was every little girl's fairytale dream -- seed pearls, white lace, and yards and yards of satin skirt, with a train that would reach halfway down the church aisle. The lace veil alone had her inner eight-year-old sighing in bliss.

Clutching her precious dress with one hand, she juggled the keys until she found the right one and inserted it into the lock. The door swung open, revealing the living room that had made real strides in livability over the past two months. When she'd first moved in, David's furniture had consisted of a couch he'd bought at Goodwill and a really tacky table made from a cable spool. The big screen television and entertainment center were worth more than all the rest of the furniture in the apartment. God love the man, he was too butch for taste.

Amelia had coaxed him into replacing the castoffs with a lovely cream living room set, colorful pastel sketches, and a pretty floor lamp with a stained glass shade. She made good money as a nurse, she argued. They could afford it.

No answer. She frowned. It was well after midnight; David would be home from his shift with the Atlanta Police. Unless something had happened... A frisson of fear slid up her spine, but she forced it away. "Hey, Dave! I went by the mall on my dinner break and picked up that gown I told you about. Wait 'til you see it..."

The bedsprings creaked from the next room. "Amelia." His voice sounded hoarse.

"Hey, babe, you okay? Did you get into another fight?" That was how they'd met. David had come by the ER after a drug dealer resisted arrest with a little too much enthusiasm. She'd been smearing antibiotic cream across those sculpted ribs when he'd asked her to dinner. Amelia had looked into those crystalline blue eyes, and fallen helplessly in lust. She hadn't been able to say no to him since.

A year later, she still lusted for him -- but she'd also come to know and love his wicked sense of humor, strong character, and clever mind.

"Come here." David normally reserved that cold, demanding tone for the prisoners he brought to the hospital after they'd tried to bust his head. He'd never before used it with her.

"David, what's wrong?" Worried, Amelia hurried into the bedroom, the dress slung over her shoulder.

They'd bought the massive iron bedstead in an antique store when she'd moved in with him. David had teased her that its tall, ornate posts were perfect for bondage.

She'd still never expected to find him naked and shackled spread-eagle to it like a beefcake buffet.

David was a big man, as dark as she was blonde, broad shouldered and narrow hipped. He spent a couple of hours in the department gym four days a week, building the layers of rippling muscle he considered an occupational necessity for a beat cop. Adding to the impression of overwhelming masculinity, a dark ruff of hair spread across his chest and arrowed down his cobblestone belly toward his thick cock.

His face was just as broad and angular as his tough body, with prominent cheekbones and a regal nose, straight and narrow. His mouth added the only note of sensual vulnerability about him with its full lower lip and lush upper curve. A hint of a dimple graced one corner, giving his smile a boyish charm.

"Yum," Amelia purred, grinning at the sight of him spread out in chains. "For me?"

"What do you think?" His cock stirred hungrily, and he stared at her like a cat watching a caged canary.

She rocked back on the rubber heels of her shoes and grinned. "This is an interesting switch. Usually I'm the one tied to that bed."

Smiling wickedly, Amelia paused just long enough to hang the dress in the closet. Then, reaching for the hem of her scrubs, she started toward him. But before she could reach his side, she realized something was wrong. He was far too pale, in the way she'd come to associate with massive blood loss, and his face was drawn. She let the hem drop. "David, are you okay?"

"I said come here!" he roared, peeling his lips back from his teeth in a savage snarl.

They couldn't possibly be real.

She gave him an uncertain smile. This must be some kind of new sex game, and yet... "What's with the Count Dracula dental work? Halloween isn't for three months."

"Get over here!" He lunged at her so hard the bed danced on the floor, but he couldn't break the chains. The iron posts began to bend.

Amelia jumped back, sick horror creeping over her with the knowledge this was no joke. Strong as he was, there was no way he should be able to bend the solid iron headboard. "Jesus, David! What the hell is going on?"

"What are you doing here?" a female voice demanded. Amelia whirled as a woman she'd never seen before stepped into the room. The stranger barely came up to her shoulder, a petite brunette with a wealth of sable hair and a small, heart-shaped face. She wore jeans and a black knit top that made the most of impressive breasts. Her frown was ferocious as she glared up at Amelia. "You don't belong here, it's too dangerous. You must leave until this is finished." She stalked past on booted feet, pulling a familiar plastic bag out of her purse. Before Amelia could ask where the hell she'd gotten a unit of whole blood, she snatched a pair of scissors off the table, clipped the top off the bag, and thrust it into David's mouth. He began to drink thirstily.

Blood. He was drinking blood.

A sense of unreality crashed in. Amelia took a step back. David. Naked. With a strange woman. Chained to a bed. Drinking blood. "Who the hell are you? Will somebody please tell me what's going on?"

"Get out!" the brunette snapped. She had an exotic accent, clipped and Slavic. "If he breaks loose from these chains, he'll kill you. Go! When he is sane again, I will tell you." She had fangs too.

Amelia's jaw dropped. "You're a vampire!"

The brunette shot her a glare. "Congratulations. Your grasp of the obvious is stunning. Now use those dubious wits and get out while you still can."

Still drinking, David rolled his blue eyes in her direction. The depths of his eyes glinted red. There was nothing at all sane in his gaze.