A Changeling For All Seasons 4 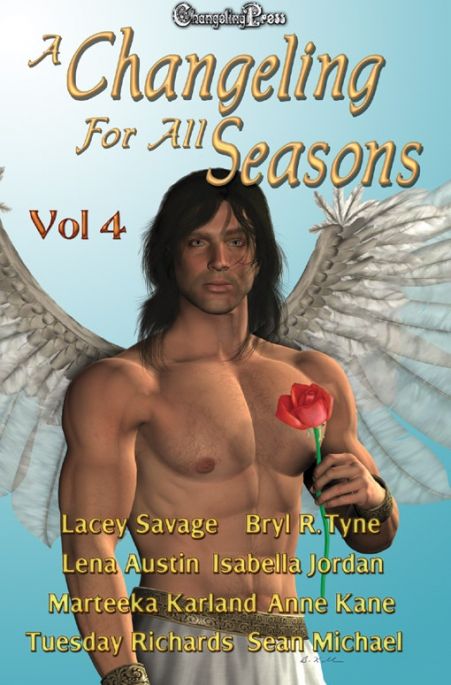 Eight  tales of Christmas Magic from your favorite Changeling authors!

Dawg-Napped! by Anne Kane: Comet's decided the cute little prairie dawg Cyndi is just what Bruce needs to cuddle up with him in his North Pole cottage.

Stray Urges by Lacey Savage: Memories made between the sheets, under the mistletoe and beneath the hard body of a devoted mate can never truly be forgotten.

An Orgasm for Christmas by Marteeka Karland: Rose knows exactly what she wants for Christmas -- the biggest screaming orgasm the Magical Forest has ever seen!

Bound for Christmas by Sean Michael: Luke has been lusting over Jenny and Greg and he's more than willing to let her wrap him up as the best Christmas present ever.

Just Wink by Bryl R. Tyne: How hard could donning a Christmassy green Speedo and pretending for thirty seconds to savor a giant candy cane be, anyway?

Christmas in the Zone by Isabella Jordan: Two guys, two gals, and an aphrodisiac under the tree. Can Rick keep up until Maddox and Madeline find an antidote?

Tails N Scales by Tuesday Richards: What is a prairie dawg to do when a family of gator shifters asks him to dinner?

"The love scenes in this story steam."

"Marteeka Karland's story draws you in with intriguing characters you can't forget."

"Gloriously naughty, Bound for Christmas showcases a sex scene the reader will be begging to recreate in the real world."

"If you want a book that's got heat and heart, then you need to read Sugarplum #5: Just Wink."

"This is hot on so many different levels, I thought it would melt the screen on my reader."

"Ms. Austin's characters are funny, sexy, and a joy to read about. "

"Who knew you could have such a steamy scene on the banks of the bayou? Whew!"

"It was so wonderful to have a winter read that scorched me up. I'm looking forward to reading more stories about gator shifters."

-- Theresa Joseph, The Romance Studio
This e-book file may contain adult scenes and language which some may find offensive and which is not appropriate for a young audience. Changeling Press E-Books are for sale to adults, only, as defined by the laws of the country in which you made your purchase. Please store your files wisely, where they cannot be accessed by under-aged readers.

As the last song ended, Gaelen raised his hands for silence. "It's time," he announced, "for all children to go to bed."

A collective, "Awwww, man!" went up from the little ones around the assembly. Rose couldn't help but smile. She remembered not wanting to leave all the fun.

"Now, now," the king chuckled. "Off to bed. You know Santa won't deliver your presents unless you're sleeping. Besides, if you're naughty tonight..." He let his last statement trail off, leaving them to ponder the consequences. It was enough to send children scampering away and to make adults smile or even laugh. Parents waved good-bye to the single and childless partygoers as they followed excited young ones home.

Rose sighed. She had just decided to turn in herself when she noticed Santa leaning against a tree, looking directly at her. Curious, Rose wondered who he was. This was a new Santa. Strange she hadn't noticed before, but this definitely wasn't the same Father Christmas of previous years.

This one was taller, bigger. His hair was long and platinum blond, not the snowy white it should have been, and he hadn't yet grown a beard.

When he beckoned her to him, she went without hesitation. A new Santa happened only once in a lifetime. There was usually a celebration just after All Hallows Eve to welcome a new Santa and his wife into their duties. Apparently not this year.

"You're new." It was obvious, and not her usual snappy self, but she had to say something. For some reason, her stomach quivered and sweat dampened her body. Her tongue stuck to the inside of her mouth, and she had to swallow a couple of times.

He only smiled and sat down in the big, plush chair near the tree. Rose remembered the children gathering around the huge thing earlier. It may have been a large chair to anyone else, but it fit this man perfectly. His big body filled the space comfortably.

Rose thought briefly about her answer, but lying to Santa didn't seem to be in her best interests. Besides, one look in his eyes -- one spine-tingling, pussy-clenching look -- and there was no way she was telling him anything other than the truth.

His naughty grin melted her insides and made her wings quiver. This elf was definitely a Santa of a different variety.

"You knew what I was going to ask for, didn't you?"

He chuckled, and the hand he had around her back stroked her wings slowly and sensually. "I'm Santa. I know everything. Didn't you know that?"

"I don't see anyone else over here. Your reputation definitely doesn't precede you. Perhaps you don't know as much as you think."

He laughed then, a great belly laugh that made Rose laugh too. "Oh my, Rose! You are truly a special faery. Only you would have the audacity to bring Santa down to size on Christmas Eve."

"Well." Rose squirmed, but he held her fast. "I only meant you could most definitely have any woman -- or man -- in the forest tonight. If you really did know everything, you'd know that I've apparently contracted a fatal, disfiguring disease because no one is getting near me tonight."

Again, he laughed. This time he had to wipe tears from his eyes, but he kept a solid grip on Rose so she was unable to slip from his lap and kick him in the shins. Despite her annoyance, his laughter was infectious, and she couldn't help but smile, though she tried valiantly not to.

"Did it ever occur to you I might be the tiniest bit territorial, Rose? Perhaps I warned everyone off. Perhaps I knew what I wanted and had no intention of letting you have fun without me."