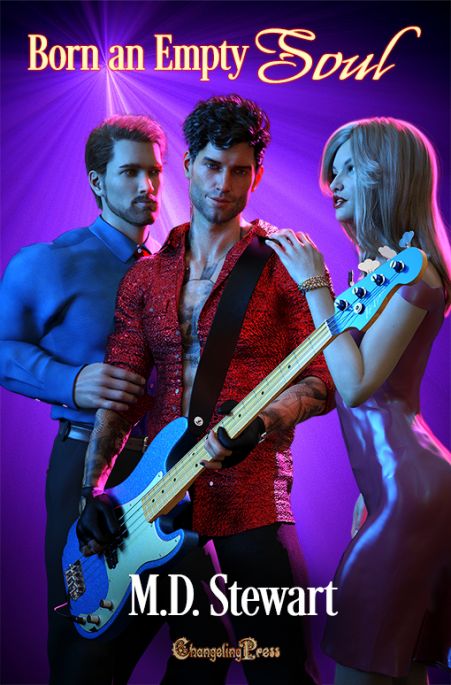 Killian: I’m a well known singer in a famous indie band, but I’ve been alone for a century, living off others’ pain -- until I meet my mates at a concert. Now I’ll have to do everything I can to convince them they are mine, or I’ll die.

Laura: Born and raised in Prenter’s Bottom, North Carolina, I watched the town wage war on homosexuality. As a straight white female, I’ve never been affected by their hatred -- until I meet Killian. Now I’ll stand against the entire town -- and my husband -- to save him.

Barclay: I was raised in a strict religious household by emotionally detached parents. I thought being gay was a sin, until one night of shared passion with Killian and my wife. Now I’m struggling with my sexuality. I’m not sure I can go against the town even to save Killian -- and my marriage.

"Whew! M.D. can write a hot scene, that's for sure, as well as tell an engaging story, and her characters are a delight. Well-realized, three-dimensional heroes who are passionate about everything they do -- and each other. I don't often read M/F/M menage these days but I'm glad I made an exception. Laura can keep up with Barclay and Killian and then some. Recommended."

-- 5 Stars from Jennifer B., Goodreads Review

The sensation of crashing back into my body forced me to sit up and take a deep breath. I gasped and tried to slow down my jolting heart. It wasn’t unusual for me to suddenly return to my body once I’d fed. But this… This time it had been almost violent.

I threw back the covers and swung my bare legs to the floor, letting the cold hardwood hit my feet, grounding me. I had been on the mortal plane for generations, but I’m not human. Not completely anyway. I survive by feeding off others. Yeah, I know, it sounds parasitic. Which I guess is accurate.

I moved from the bed and crossed the room to the pack of cigarettes lying on the desk. Nasty habit, smoking -- one I didn’t need or particularly like. Since it couldn’t kill me, I used it to bring me back to full awareness after I returned from my astral travels. The scent of sulfur almost overpowered the smell of lit tobacco, and I inhaled the menthol deep into my lungs. Sitting on the edge of the dresser, I took a few more drags of the cigarette before I reached over to turn on the lamp.

Even though I didn’t need the light to see, it showed that my red nail polish was starting to chip. Bollocks. I shrugged and took another inhale of the acrid smoke and held it in while I tried to remember every moment of this last feeding. But my thoughts always strayed back to my first memories of him.

It had been close to a year since I walked through a portal and spied the gorgeous man standing outside a large house. I’ve been around a long time, and I’ve seen many good-looking humans, but something about him drew me. The connection was instant, and I flew toward him, unable to stop the need in my soul to touch him.

Though he wore a suit, I could see the outline of his muscular form. His hair wasn’t red or brown, but a perfect mixture of the two. His full beard and intense caramel eyes begged me to touch him. And I wanted to. I was pure energy at that point, but once I brushed him, there was a rush through my soul like touching a live wire. I threw back my head and let myself feel his innermost needs. They filed against every jagged edge of my cursed being, smoothing me out and filling parts of me that were missing.

I attached to him, not wanting to let him go, picking up bits and pieces of his thoughts and memories. His energy felt so pure and substantial, I wasn’t sure I’d ever be able to disengage. I looked past him to the small outdoor building where two men kissed and ground against each another, and felt this man’s energy rise steadily. It was almost like taking a shot of tequila. I felt the warmth of his sexual desire spread through me. Awareness of his name seeped into my brain, along with the lust energy I siphoned. Barclay. I wanted to climb inside Barclay’s body and bathe in his essence, but my energy reserve was filling faster than I wanted. I knew I’d unlock when I was full, whether I wanted to or not.

The redhead we watched turned his green eyes toward us. Barclay’s instant shame at his voyeurism pushed me from his aura. The most interesting thing was that I wasn’t sent back to my corporeal form straight away. This hadn’t happened to me before, so I knew it was because he was mine.

Later, when my anima geminae, -- soul twin -- went back to the house to retrieve an item he’d forgotten, I felt the spike in his desire again and moved behind him to see the men he’d just been meeting with. They were having the hottest sex I’d seen in fucking decades. My energy reserves filled so quickly that I was jerked back to my body. The change was so abrupt that I felt like part of me had been ripped away and left with him. It hurt in so many ways.

I kept going back to him, though. Once I feed on someone, I usually go on to the next person. Sometimes I can stay with one person for multiple feedings, but only if they have the energy to spare.

Yet I couldn’t stay away from Barclay. I couldn’t force myself to stop feeding on him. It was the purest energy I’d ever encountered. It felt so good sliding over my old, jagged soul like a cold river moving over the rocks in its bed. As rushing water smoothed stones, he soothed me and gave me energy at the same time.

This last visit though -- God, he was thinking about the two men again, getting more curious about how sex with another man would feel. I stoked his desire, hoping to feed on him as he touched himself.

Then his wife showed up in his office, and it felt like lightning crackled and split the air. The red heat of pure sex energy filled the room. I’d never felt anything like it. I needed it like a drug, and I craved my next fix.

The burning on my fingers from my ignored cigarette brought me back to the present. I put the butt in the ashtray before running my fingers through my dark hair. I kept it fashionable, which was important for someone like me. I sang in one of the most popular indie rock bands on the planet. It was the perfect way to travel the world, find energy sources, and not spend my precious reserves on astral travel. But it didn’t matter now. If I was in fucking Singapore, I’d still travel straight to my new soul twin. I could do little else. Barclay was my mate, and I’d never want energy from another being.

I looked at the clock on the dresser. The sun would be up soon, and I needed to work on some of my new songs before heading to the show. I was full of energy anyway, so I found my sleep pants and slid them on over my boxer briefs. The band would be finishing our tour soon, and I made sure the last stop would be Charlotte, North Carolina. I even had had my manager book me at Cross Roads Bed and Breakfast for some R&R after the tour ended.