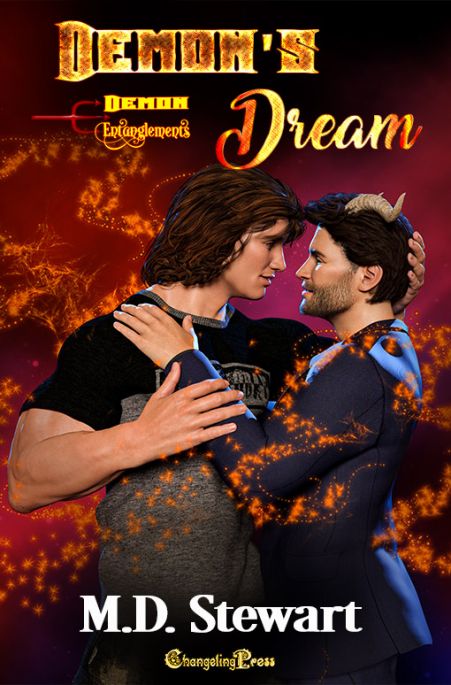 Winston chose to become an Incubus more than a century ago, but lately, dream sex has been boring and unfulfilling. A chance meeting with a geeky comic book lover could change everything. Winston’s always been straight, but now all he can think of is the soft lips and hazel eyes -- of a man.

Seth is used to being alone. Even buff guys can be bullied, so, except for his kitten and best friend, he never socializes. After being dragged to a bar to see his favorite band, he bumps into the sexiest man he's ever seen. Then Seth has the best sex of his life with Winston... in a dream.

Will the comic book geek wake up, overcome his fears, and go after the one man who makes him feel alive?

Winston had always thought the outside of the Gilded Lili unremarkable. The windows were darkened, with flood lights on the sidewalk to illuminate the crowd and a huge, muscular man guarding the door. A velvet rope snaked along, corralling the line of people wanting entry.

The inside, though, was bright, shiny, and modern. The inviting look helped humans to feel comfortable and relaxed.

Transition enhanced the natural attributes of all lili, both Incubi and Succubi. They looked like themselves, only much more attractive, their horns hidden from humans.

Winston glanced around in disinterest, though the dance floor teemed with sexy humans. They gyrated to loud music, their bodies grinding against each other. The resulting sexual haze covered his body in a fine mist of energy. Goddess, he missed being mortal and the thrill of knowing life was finite and fragile. The first one hundred years of being an incubus had snuffed that joy out.

He’d been an adrenaline junkie even before the term existed. Hot air balloons had been the height of technology when he was mortal. Nothing beat the adventure of getting in that basket and spying on enemy troops. Knowing he could die by crashing or getting shot gave him a natural high.

One reason he’d jumped at the chance at immortality was to seek new adventures. Since then, he’d had a long life filled with so many memories, good, bad, and sexy. But lately, knowing he was going to slip into a woman’s dreams to feed just wasn’t as stimulating. The last several interludes, he didn’t even come, just drank in her energy and moved on. That realization was slightly depressing. He needed to figure out how he was going to get past this ennui.

A sudden warm feeling poured over Winston, yanking him from his musings. The sensation was foreign, drawing him to a couple standing at the bar. A beautiful, curvy redhead stood next to a tall, powerfully built man. Oddly, Winston felt an attraction for the male rather than the woman.

The man was well over six feet tall, with broad shoulders and a trim waist. His shirt stretched over a muscular back and arms, and when he turned to speak to his companion, his tight jeans revealed a round bubble butt. His thick hair was mahogany brown and wavy, barely reaching the nape of his neck.

Winston felt driven to meet the man. His heart and soul demanded it.

Winding through the large crowd, he slowly approached the couple. It didn’t matter to him if they were romantic partners, since Winston would only be a dream lover.

The big man looked confused as he gazed around the bar, maybe even a little scared. But why would he be afraid? Had he come into the bar to escape danger? Winston’s first instinct was to protect the human, wrap him in his arms and soothe his fears.

Win reached out, surprised to find his own hand trembling, and touched the shoulder of the human male. Unexpectedly, his own body lit up with awareness and deep arousal. When the man turned, Winston gazed into the most amazing honey-brown eyes. The male gasped slightly, his pupils widening.