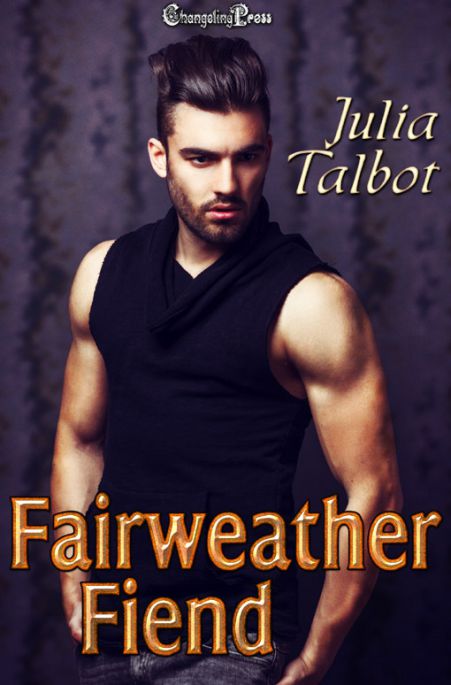 When demon Dalion gets the call to use his ghost-hunting skills on an old house that's being flipped, he expects nothing more than a ghost or two and a few good meals on an expense account. What he gets is hunky contractor Clint, and an inter-dimensional portal in a coal room.

Clint figures he's got a ghost when he gets pushed down the basement stairs at the house he's trying to flip and no one else is there. When he hires Dal, he doesn't expect a sexy demon he can't resist. The two of them will have to work together to get rid of the presence in the house, and to make something strong out of their white-hot attraction.

"If you like paranormal stories with a great deal of humor, if a demon with a sense of humor and a feisty contractor sound like an interesting combination, and if you’re looking for a read that is as funny as it is hot, then you will probably like this novella as much as I do."

-- Serena Yates, Rainbow Book Reviews
This e-book file may contain adult scenes and language which some may find offensive and which is not appropriate for a young audience. Changeling Press E-Books are for sale to adults, only, as defined by the laws of the country in which you made your purchase. Please store your files wisely, where they cannot be accessed by under-aged readers.

"You're not as dark as you want people to think you are."

Dalion glanced at his assistant, Moira, and pursed his lips. "Remind me why I have a personal assistant again?"

She arched one perfectly plucked brow at him. Moira had the look of a 1950s typing pool star. The brows were heavier now than when she'd been in her 1940s stage, and the bullet bras more pronounced. He always had liked a Peter Pan collar, though.

"Because you're a busy demon."

"Huh." He shook his head. "I'm actually classified as a minor devil. I'm the frickin' prince of darkness, honey."

"Right." She snorted. "You have a meeting in fifteen."

"Your next client." She clicked out of the room, her high heels and seamed stockings matching her slim skirt perfectly. No human could keep a seam that straight, but he'd never figured out what Moira might be mixed with. Maybe he ought to look harder into that.

An email dossier popped up on his machine, and Dalion opened it up. Hmm. Old house. Ghost activity since back in the sixties. New owner who was worried about selling the place once he got it flipped.

His official title was Paranormal Investigator. Dalion had a whole wall of fake degrees, all of them issued to Dalton Freeman. Dalion was far too demon language, wasn't it? People wondered if a name like his was an affectation or something real. Dal worked with both his real and assumed name, though his true name would melt human ears if he spoke it out loud.

"Mr. James is here," Moira told him over the intercom a few minutes later.

"Send him in." If the guy was here in his office that meant Mr. James was local. While that was bad for per diem expenses, it was also the easiest sort of job. No travel required.

Oh, my. The tall drink of broad-shouldered water who walked through his door made Dalion drool. He did have a real jones for the Lightbringer look, all shaggy blond hair and bright, silvery gray eyes. Yum. Dalion stood, holding out a hand to shake.

"Mr. James. Thank you for coming in. Dal Freeman."

"Clint James. Nice to meet you." The voice was surprisingly deep, the handshake firm, the contact enough to send tingles up Dalion's arm. Well, now. That usually boded well for his sex life.

"Please, have a seat and tell me what I can do for you."

Clint sat, smoothing his hands down his pants, a stall that meant someone was gathering their thoughts. "I flip houses. I bought this amazing Craftsman in the Springs. Full basement. Great place. I was digging out the old coal room and I think I let something loose."

"Ha." Clint rolled his eyes. "A ghost. A poltergeist. Hell if I know. All I know is I can't get any work done."

"Okay. So you have activity. You want me to do what? Identify? Drive it away?"

"Identify and contain, yeah. I can't sell the place like it is. Things are moving around like they're on a flying trapeze."

"Gotcha. So, Colorado Springs?" That was a per diem. Boom. His offices sat right in Cherry Creek in Denver. Colorado Springs would mean an overnight at the property or at a nearby hotel. Oh, he did hope for a hotel. Someplace with a hot tub.

"Yep. Can you at least come do a walk through? You know, a sweep?"

He smothered a grin. "Well, this doesn't work exactly like Ghost Hunters, you know. If that was the case I would just tell you to download the app on your phone and see what you found."

"I did that." Clint remained deadpan when he said it, so Dal had no idea if he was serious.

"Oh, well, yes. I do have some equipment to bring to the house, but first I want to conduct a thorough interview with you here, offsite so it's not tainted by your feelings when you're in the house. Then I would like to interview anyone else who might have experienced anything."

Clint made a face. "Maybe my real estate agent? Flipping is a sideline for me, so I don't have a crew."

He watched Clint's face carefully. "No wife or girlfriend?"

"No." The word fell flat and emotionless between them, but Dalion felt the currents of emotion the question had stirred. A delicious melange of guilt, denial, and anger lay there, and Dalion licked it all up with his mental tongue, savoring it.