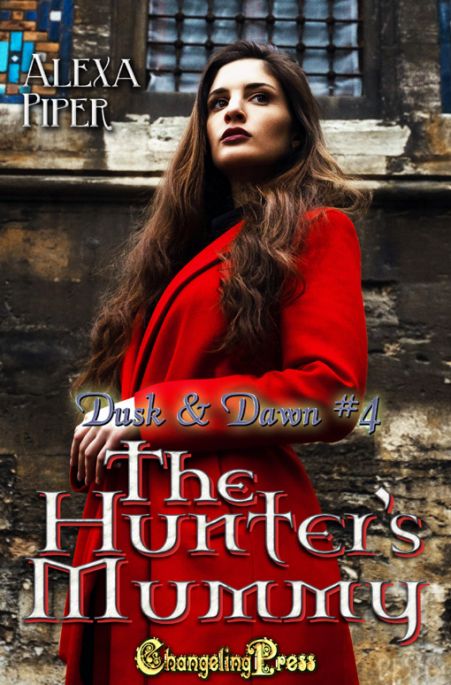 Ravelle is looking forward to being back in France. All she wants is to have wine with her daughter-in-law, catch up with an old vampire acquaintance, and get closer to Yanis, who is a breath of fresh air to Ravelle. She is not looking forward to working, and a seasoned vampire hunter like Ravelle should be granted a simple, quiet vacation.

Yet the hunter soon smells murder on the air, and where there’s murder, there is a corpse, and where there's a tenderly wrapped corpse, there tends to be a crime, in Ravelle’s experience. So rather than pursuing wine, Ravelle will have to solve all the mummy's mysteries.

Ravelle felt a mix of excitement and relief rise in her belly as the plane was getting ready to touch down. In the seat next to her, Robyn was stretching and yawning, and Ravelle saw the duller colors of her emotions floating out.

“You should be more excited,” Ravelle said, and her human daughter-in-law interrupted her stretching to look at Ravelle. Robyn’s storm-gray eyes and fair skin, framed with dark hair, always made Ravelle think of the heroines of fairy tales that were mostly set in dark woods and involved the killing of bears or wolves, possibly both.

Robyn tilted her head. “That’s what you said about the flight attendant three hours ago.”

“Daughter, I was just a little hungry three hours ago, and he looks delicious.” He did, but Ravelle in fact had not been able to sneak the man into a private area to have a taste. Not that she would ever do such a thing if the flight attendant in question weren’t willing to be snuck into a private corner to give Ravelle a taste. But one could fantasize, and fantasizing was about the only thing that kept cross-Atlantic air travel bearable, or so Ravelle thought -- that, and the thought of being back in France.

“I told you, you can have some of my blood.” Robyn held her wrist up for emphasis.

Though said quietly, it drew the attention of another passenger, an older Frenchman who had been eyeing Robyn and Ravelle with suspicion ever since they had walked aboard and taken up two first-class seats behind him. Clearly, the human felt their kind, meaning vampires and those who associated with them, should travel coach, or not at all.

He probably thinks Robyn is my private blood donor slash lover, Ravelle thought. At least that’s how he looks at her. Ravelle swallowed the distaste the man’s bile-colored disapproval induced and instead focused on the conversation with Robyn. His emotions had flickered in colors of suspicion and scorn all through the flight, and it was people such as this one who made Ravelle dislike her own vampiric skill of seeing a person’s emotions like colors around them. It made ugliness so very obvious.

“I am not so hungry that I would drink from you. Besides, I wasn’t really just hungry for blood. Or at all.”

“Oh.” Robyn considered this. “Well, I’m sorry you didn’t find, uhm, anything suitable at the wedding. To slake that hunger blood can never slake.”

It had been an entertaining enough wedding, however, made more notable by a good amount of creative murder preceding it. Ravelle was still sad for the goat, because she had always felt a fondness for those baaing creatures with the strange eyes.

Ravelle smiled at Robyn. “I found my son had chosen to wisely marry his love, and my grandson, while needing a massive amount of prompting, followed suit and married his love without first checking his schedule. I assure you, I am quite satisfied with your wedding. Even if I do admit yours and Maxim’s combined rhyming is not the joy you two think it is. For the people around you, that is.” Ravelle caught a glimpse of the flight attendant. “Though I wouldn’t mind some giddily giving and glistening garçon.”

Robyn followed her gaze. “Who wouldn’t give their last groan to get the garçon.”

Ravelle saw the colors of her emotions change, not quite the hard obsidian of loss, but a darkening blue. Robyn was missing Maxim, and if Ravelle was any judge, her adoptive son was missing his bride as well, and probably showering any person inadvertently crossing his path with verse and meter to hide it.

“I’m sure he’ll call before we even have a chance to pick up the luggage.”

Robyn looked at Ravelle, then looked away. “Am I being that obvious?”

Ravelle shook her head. “I’m just that observant. Where else did you think Maxim got that from?”

“It thought he had, with eyes of flame, been tracing the ignorant Jabberwock before he took, with vorpal blade and snicker-snack, his head and turned the beast of carelessness quite dead,” Robyn said, slaying Carroll’s poem, because Maxim certainly did not get his bardic nature from her.

Ravelle moaned. “And now there are two of you manxome foes. It is no wonder Heath and Brian decided to leave town for an impromptu honeymoon.”

Maxim’s dhampire son and his Lar husband had, in fact, made a startlingly quick and efficient exit, likely because Heath was a very organized packer and planner. Ravelle, in contrast, had needed almost an entire week to convince Robyn a trip with just her mother-in-law was in order.

“Are you accusing me of reckless rhyming?” Robyn asked in mock shock as the plane bumped lightly upon touchdown. The deceleration pushed them both back in their seats.

“Yes,” Ravelle said. “But as your husband loves to remind me, it is not a crime to rhyme, and certainly no offense punishable by hunter.”

Robyn gave her a curious look, and Ravelle watched the colors of her emotions shift to curiosity. “So are we doing that? Hunting things? Is that why we told Maxim he couldn’t come?”