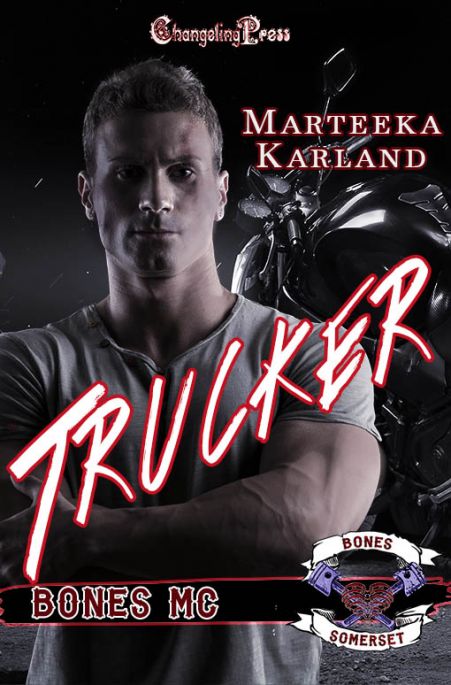 Helen -- I’ve made some bad choices in my life. The worst was falling for a man who kidnapped me and held me hostage. He wants my baby. Why, I have no idea, but there’s no way he’s getting it without a fight. Once this is over, assuming I’m still alive, I’m going to need some serious help.

Trucker -- The small redhead blows me away at first sight. And not only because of the knife sticking out of her very pregnant belly. She’s fierce as a tiger. Brave as any member of Bones. I know I have to protect her, no matter what kind of trouble she’s in. Once she’s healed, I know she’s going to be mine. I just have to convince her of it. Until then, I’ll protect her, and her kid, with my very life. Once the asshole who did this is dead, then I’ll prove to her why I’m the best choice to be her man.

WARNING: These men play for keeps, and they don’t tolerate men who hurt women and children. They protect their own to the death, and God help anyone who gets in their way. Don’t expect the warm and fuzzies, but you can always expect a HEA and a steamy good time.

"Helen and Trucker. And a baby. For me, it was the little things he did for her that just stole my heart. The highlight for me was when Helen goes from not trusting him to falling in love with him. That kind of change takes time... he was also sweet, understanding, and proud that his woman is strong. Trucker is fast, quick read that will tug at your heart strings while satisfying your urge to read an MC Romance."

Trucker rolled his eyes and sighed. “Right where you fuckin’ left it, you bastard!” He had no idea who was calling out, but it didn’t much matter to Trucker. It was all pretty much the same every time a member of the club needed a vehicle other than their own bike. He’d long ago given up being really angry. Besides, it was all part of the camaraderie.

“Ain’t you in charge of all the vehicles around here?”

“Yep. Ain’t no Goddamned babysitter though. And I ain’t your Goddamned housekeeper! You take somethin’, you can damned well put it back where you found it.”

Trucker continued working on the bike in his shop, a grin tugging at his lips. The men of Bones could act like kids sometimes. It was all part of the fun. They’d had several close calls recently, and the whole of Bones needed to have a little fun.

That was the beauty of Bones. They’d started out as an MC club of men. Now, they were becoming a family complete with wives and children. Trucker was gratified to see Cain and Torpedo encouraging the change. Oh, they still sometimes skirted the edge of legality and wouldn’t hesitate to do what had to be done to protect their own people, but now they did more toward protecting their community. Their reputation was mostly enough to keep out the rabble who thought they’d just run roughshod through Somerset. The ones who weren’t as afraid as they should be soon learned to be.

Trucker didn’t look up from his task. “In the barn where I intend to service it when I get done servicing the bikes in here.”

“Yeah. Couple of the prospects wanted to go huntin’. I told them they could take that one. Figured if they trashed it, you wouldn’t have to kill them over it.”

Trucker snorted but went back to work. “You know better. They take it out, they bring it back like they found it. With everything clean. Including the fuckin’ toilet.”

“It’s in the other bay in the barn. Serviced it for Cheetah a couple weeks ago. She always puts things back where they belong. Must be the absence of the Y chromosome.”

Trucker paused, looking up at Torpedo. “Yeah. Said she needed it. Didn’t see no reason not to let her have it. Didn’t think she was gonna be out this long, but ain’t none of my business. And I know I saw her just a few days ago.”

Trucker shrugged. “Give her a call. See what she’s got goin’ on. She called first dibs though. Ain’t tellin’ her she’s got to come back, and neither are you or any of the others.”

“Hey. I had no intention. She may not be a patched member, but she’s done good by the club and ExFil.”

“Text her. Make sure she actually has it. I’d hate to have to start the fuckin’ day with a killin’ if that fucker Pig took it.”

“I thought Stunner took care of that little fuck?”

“He did. Boy seems to have responded to brute force more than all the fuckin’ talkin’ and smacks upside the head in the world.”

“Good thing Mama was able to patch him up. I was worried about the fucker for a while there.”

Trucker shrugged. “He’d been asking for it for a while. Guess him mouthin’ off to little Suzie wasn’t the worst thing he did, but maybe it will be the last.”

“He got what he deserved. I just hope he learns from it.”

“Sent a text. Though, I don’t remember seeing Cheetah today. She’s probably got the thing parked at some community event. Wasn’t there a fun run today? She usually makes hot chocolate and coffee, or lemonade and iced tea for things like that.”

“Good point.” Trucker took out his phone and sent off a quick text to Cheetah behind Torpedo’s before shoving it back in his pocket. She might ignore one text for a few minutes, but not two.

“Yep. Routine stuff.” Trucker pointed to Torpedo’s bike. “You could go a little easier on the brakes.”

Torpedo grinned at him. “Now, what fun would that be?”

“No fun if you end up on the pavement.”

Torpedo turned to go, but Trucker called to him. “Let me know when you find Cheetah and my RV.” He didn’t have to wait long. Trucker actually heard the old Winnebago long before he saw the thing.

Picking up a rag to wipe off the wrench he was using, Trucker walked outside his workshop into the brisk, February air. Off in the distance, screaming up the long driveway to the clubhouse, was the missing RV.

“What the everlasting fuck? Torpedo!”

“I see it, Trucker.” Torpedo was just outside the building talking with Bohannon, Sword, and Viper.

The Winnebago made a sharp turn and slid to a halt next to the clubhouse in the parking lot. Several men jumped out of the way. A few seconds later, the door to the back flew open. Cheetah stumbled out.

The men headed for the RV. Bohannon yelled for Luna, his woman, to go for Mama and Pops. Trucker ran for the RV along with the others. Something made him… uncomfortable. There was a tingle between his shoulder blades that always meant there was something wrong. What it could possibly be, Trucker couldn’t imagine. Not in their home territory. Cheetah had brought the RV into their clubhouse, so he doubted she’d brought danger to their door.

An ear-piercing shriek came from inside the Winnebago. A woman? The men looked at each other before Bohannon, who was closest, shoved Cheetah out of the way and entered the vehicle. Trucker was right behind him. What he saw froze his blood.

There was a table that folded down into a bed across from the stove and counter. On that bed lay a very pregnant woman who had been stabbed in the abdomen. He knew she’d been stabbed because the knife handle was still sticking out. The blade appeared to have been stabilized, probably by Cheetah, but the wound was steadily and persistently dripping blood onto the thin mattress and down to the floor.

Sweat beaded the young woman’s face, strands of dark auburn hair sticking to her forehead and cheeks. Her expression was one of pain, fear, and grief. Her gaze locked with Trucker’s, sea-green eyes sparkling like diamonds with her tears. “Help me. Please.” Her voice was tremulous. Her lips quivered as tears coursed from her eyes down her temples.

“What the fuck happened here?” Bohannon demanded as he checked the small area for anyone else.

“What’s it look like?” Cheetah bit out. “She’s been fucking stabbed! Get her to Mama!”

Trucker couldn’t seem to move. He was caught in some kind of web as he continued to stare into the young woman’s eyes. He couldn’t register much other than the brilliant green of her eyes and the red blood staining her clothing around the knife.

“Get her inside,” Bohannon ordered. “Luna’s gettin’ Mama, but she can’t do anything out here. Not enough room.”

When Bohannon moved to the girl, Trucker shouldered his way in front of his brother, carefully scooping her up into his arms. Her hands were covered in blood, one shaking horribly where it fluttered close to the knife. He could tell she wanted it out but knew better than to just yank.

“Easy,” he said, as he turned sideways to get them out of the small door. With his size and her advanced pregnancy, they barely fit, and he had to be careful not to jar her too much with that knife stuck in her abdomen. “Just relax if you can. We’ll get you taken care of.”

“No police,” she gasped.

Trucker looked up sharply at Cheetah as he got them in firm ground, out of the RV. She just shook her head before falling into step behind them. Later. He’d deal with that later. Getting the girl to Mama was the main concern at the moment.

“They call me Trucker,” he said as he strode up to the clubhouse in long, confident strides. “What’s your name, little miss?”