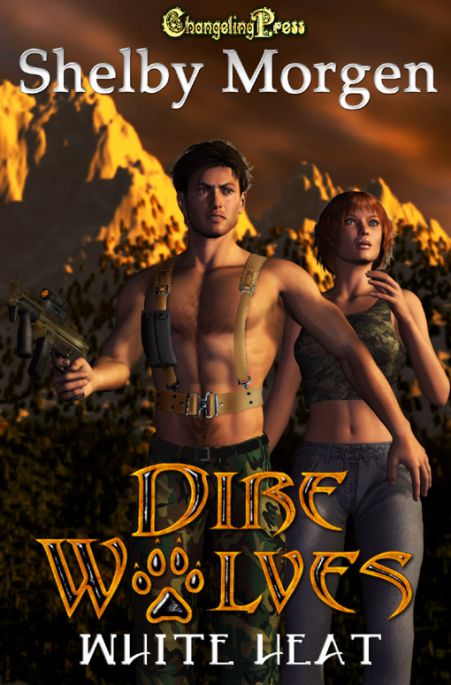 Time to take down the fanatical Human Defense League. The Ulfhednar Council's got just the men for the job. But the last thing Jake Parker wants is a partner. Especially not another Alpha wolf -- and definitely not the man who stole his woman.

Heather Grant's got far too much experience working with stubborn males. She figures it would serve both Alphas right if their pride blows their cover. But someone's got to salvage the mission. What she doesn't count on is her instant reaction to Jake Parker's wolf. Just the scent of this particular Alpha's got her hormones racing.

How's a man supposed to concentrate with an utterly sexy Dire Wolf bitch flashing her tail at him? If he gets out of this mission alive, Jake swears he's going to kill the woman. Or claim her.

"The plot is full of suspense and romance, with some wild love scenes thrown in. I was on the edge of my seat for most of the story..."

-- Maura Frankman, The Romance Studio
This e-book file may contain adult scenes and language which some may find offensive and which is not appropriate for a young audience. Changeling Press E-Books are for sale to adults, only, as defined by the laws of the country in which you made your purchase. Please store your files wisely, where they cannot be accessed by under-aged readers.

"No shit." At least two dozen more M16s, equipped with four rail hand guards, scopes, and collapsible stocks, as well as a couple M50 machine guns, and stack after stack of tactical readiness packs full of thirty round mags. Fuck. There was enough ammo in this room alone to take out Denver.

Not to mention the case cleaner, loading press, and crimper. The air reeked of silver. If he'd ever had any doubt --

"What the hell are you two doing?"

Jake resisted the urge to spin on his heel and land an elbow in the chest of the person who'd managed to sneak up behind him -- but only because the whispered voice belonged to a woman. No matter how deep undercover he was, he didn't hit women.

He might shoot her, but there was no way he was going to hit her.

A glance over his shoulder almost made him regret that decision. Heather Grant. Of all the gin joints... "What the hell are you doing here?"

"My job. Which is to get your sorry asses out of whatever cluster-fuck you two have gotten yourselves into."

John Wolfe treated Heather to a throaty growl of disapproval. "We're doing fine, thanks. Who's this?" He addressed the question to Jake, though he didn't take his attention off the woman.

Jake took a small bit of satisfaction in the bigger man's obvious surprise. "I told you I wasn't after Doc Grier." Which was the truth. Mostly.

The Council had decided Wolfe needed backup on this mission. They neglected to ask. Though that was nothing new. The Council never really asked anyone. They just issued orders. So here Jake was, trying to run an undercover op, sandwiched between the big, rangy wolf who thought Jake was after his woman, and Heather, the hard-headed handler who'd played the role of his wife for the last five years. Really. Could life get any better?

John frowned at them speculatively. "Zan said you were married, but..."

"Would you two shut the fuck up before you get us all killed? Between the two of you you're about as subtle as a herd of moose."

Red hair and a temper to match. Not to mention a killer bod that looked even better in tight fitting jeans and that scrap of camo. Jake grinned, enjoying her fit of pique. Maybe he'd tell Wolfe they weren't really married, and then again, maybe he wouldn't. This could be fun. Wolfe had it coming, too, after the way he'd been acting so proprietary around Doc Grier. Two Alpha wolves. One woman. A recipe for disaster.

The heavy tread of boots in the corridor brought an immediate halt to the get-to-know-you bullshit.

Before Jake had time to react, Heather dove at Jake, landing with her legs wrapped around his waist and her lips plastered over his in what had to be the least romantic kiss of his life. Though, perversely, his cock sprung to immediate attention. Had to be a proximity thing, because there was nothing even vaguely sexy about getting shot.

"Hey! You there! What the hell are you two doing in here?" Wolfe's voice sang out loud enough to wake the dead.

The sudden appearance of multiple M16s had an immediate calming effect on Jake's libido. He peeled Heather off his waist and set her on the floor, pushing her protectively behind him. "Dude, if you have to ask..."

"I can see what you're doing, idiot. Why are you doing it here? In this room? In this building? This area's supposed to be secure!"

Wolfe was way too into his role, Jake thought with a barely disguised grin. But it was working. The guards immediately moved to back up their new head of security.

There were three of them, all armed to the teeth. With a bit of a distraction, Jake might be able to take down two of them, but three? Not unless he went wolf...

"For fuck's sake, Val, it's a closet. Where the hell else are we supposed to make out?" Val. Trust Heather to get their cover names right. He'd find out what the hell hers was and what she was doing here later. Damn the Council and their interfering ways, anyway. Though right now, she was damn handy.

Wolfe wasn't the only one who could play his part. Jake turned on Heather, pouring his frustration into his act. "Look, woman, if you don't clean up that raunchy mouth of yours, we're not going to be making out anywhere. You got a mouth like a toilet on you, you know that?"

"You didn't say that when it was wrapped around that little prick of yours, did you?"

"You didn't say it was little then, either. More like Oh, Burt, you're so big... Oh, Burt, give it to me harder! I should have listened to my mother." (Who'd told him, Go to medical school. The pack needs more doctors.)

It wasn't easy to defy your mother, especially when she was a Dire Wolf. And a member of the Ulfhednar Ruling Council. If he got shot out here, she'd never forgive him.

"All right! All right! That's enough," Wolfe barked. "We got a mission to prepare for. You two deserve each other. Get the hell out of here."

Jake reached for Heather and she ducked away, sliding between the men and heading for the doorway. "Besides, you said you like it when I talk dirty."