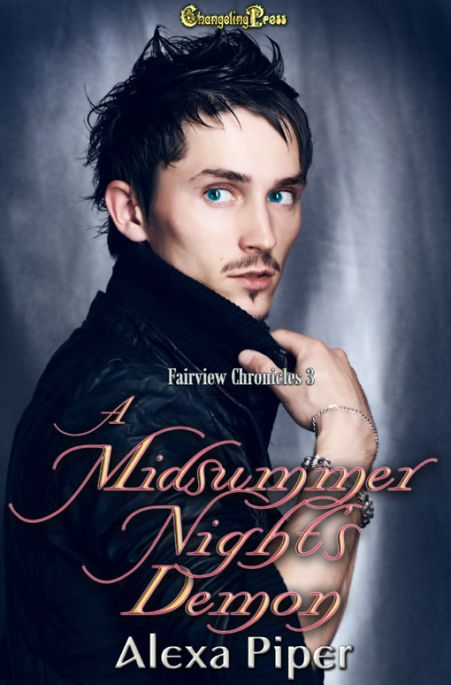 The son of the Lord of Hell, Lark, is engaged to a demon whom he does not love. He escapes hell, his father, and his fiancé. His flight takes him to the human plane, where he finds himself summoned by Chris, former lawyer and current accountant of St. John Investigations.

Chris really just wanted to learn about demonic math when he decided to summon one of the denizens of hell, but confronted with Lark, he decides getting the beautiful demon into his bed is far more appealing than accounting.

But Lark’s escape from hell does not go unnoticed, and soon the Lord of Hell himself arrives in Fairview to take his son back to the altar. Three wicked witches also come to the city looking for a love that was dragged to hell. It might just be one magical desk that holds the key to everyone’s happiness and happily-ever-after.

"This was a really funny story. Twisting many mythologies and supernatural creatures together (including a sort of sentient desk, yes a desk) Alexa Piper comes up with one of the funniest things that I have read this year. This is book three of The Fairvew Chronicles, a series that I really love and hope goes on for many books... I can’t wait to read the next one. Meanwhile I am going to re read this one like I would a good movie to catch all the many little bits of business and mythological references that I missed the first time."

Chris was waiting at a crossroads for the moon to reach its zenith. It was a nice night for summoning, or at the very least, it was a nice night, warm with spring, and quiet, perfectly cloudless. Chris didn’t really know what was good for summoning as he had never ever done such a thing before, unless calling forth a witness to the witness stand qualified.

Chris brushed chalk from his hands and looked at the design he had drawn onto the concrete. The circle had needed some adjusting -- a manhole had interrupted the pattern, and in the end he had moved it just a bit, hoping that it was still close enough to where the roads intersected to get the summoning done.

The Vineyard was very cozy for calling a demon, Chris thought. He had considered finding an abandoned spot at the docks, but it turned out rich people didn’t hang out in the streets much after dark. Instead, the streets were very empty, and because it was the Vineyard, they were very clean, made scenic by walled-in or fenced-off front yards, some of which sported a fountain or a pond. All the hedges in the Vineyard were well-trimmed.

Chris liked rich people, and not just for their skill -- or their gardeners’ skills -- with trimming greenery. He was himself not exactly poor, but he didn’t care much for money. He enjoyed taking care of it, though. He enjoyed accounting, because seeing things balanced just so always flooded Chris with a deep sense of happiness.

Thinking that demons should be the best accountants between this world and the one that was called the In-Between was exciting. Chris hoped they did trainings. He would love to learn a thing or two about demonic math or hellish arithmetic.

The moon was almost where he needed it to be, and so Chris pulled out the piece of paper he had found tucked way back in a drawer of Cora’s desk. He had not even noticed that drawer when he’d first taken over for Cora while she and Valerian were in China, but it had certainly been there when he’d opened it to clean and organize it.

He cleared his throat. “I summon thee like dying night summons morning’s first breath, come anon, Lark, demon of demon borne, demon birthed by witch, meet me at moon’s apex where roads cut crosses in the earth, where paths meet and diverge. I call thee. Come.”

Chris looked around. The Vineyard was still quiet. Nothing stirred. A fountain twinkled happily behind a ruler-straight hedge. “Too bad. A demon would’ve been fun,” Chris said and stuffed the paper back into his jacket pocket. He looked at the circle, chalked just like one of Rafe’s books had said to chalk a demon-summoning circle. Chris wondered what the residents would make of it. Perhaps he should leave some of Rafe’s cards in a few mailboxes nearby. It might get them a concerned client who wanted a PI to make sure the neighbors were not Satanists.

Before Chris could take a step away from the chalk circle and toward a mailbox, the air stirred and began to sizzle with electricity. A scent of earth and mulch permeated everything, and rumbling thunder rolled through the cloudless climes. In the circle, someone took shape.

“Wow,” Chris said. He had summoned a demon, he really had. Had Cora been there -- or Valerian for that matter -- he’d have high-fived them. “Life’s good.” He had another thing to scratch off the old bucket list.

“The human plane!” the demon said when he had become fully corporeal. He stood in the center of the circle and looked around with bright blue eyes. His raven hair appeared feathery soft. Fuck. Are demons supposed to look this good? I hope this one isn’t taken. The demon looked at Chris. “You summoned me. Thank you, I am in your debt. My name is Lark. What’s yours?”

Chris looked the demon up and down. I hope this hell creature is open to doing a bit more than just going over the books and the math. Quite a bit more. “I’m Chris. Your clothes are muddy.”