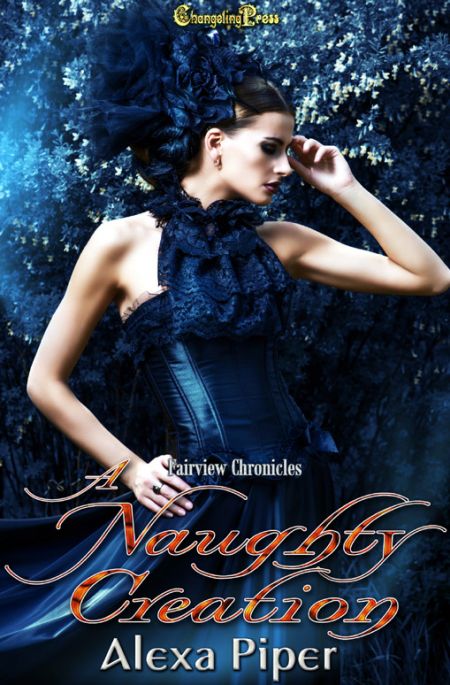 Aife has been pulled out of her own time into the present day, and is struggling with a strange new world she can hardly comprehend. The only constant that she knows, the only person who can even begin to understand her, is Myrtis. Yet Myrtis is a vampire who hides his true feelings all too easily.

Myrtis knows loneliness and has sought it out. He knows the pain of love and loss even better. He swore to Aife that he would help her fit into this time. Loving her wasn’t what he anticipated when he met the druid, but it isn’t a feeling he will deny.

Elsewhere in the city, a creature brought back from the dead is longing for his freedom from the necromancress who reanimated him. Draining a druid’s power might just be the way to accomplish that, and so the creature sets out to become free, because alive simply isn’t enough.

Aife paced through the midnight dark house, her bare feet hardly making a sound on the clean, smooth floor. There were a few lamps on, which was one of the new words she had learned since she had been dragged forward in time not two months ago. She now lived with a vampire in a townhouse and still had to get used to wearing jeans and drinking coffee. Focusing on the words helped, because more often than not, the things themselves were just too strange to comprehend, and Aife had thought more than once that her ignorance and stoic acceptance of them was easier than asking about the strangeness, never mind that Myrtis was always willing to explain whatever Aife did choose to ask with that unnatural patience he had.

Aife walked into the kitchen, her eyes drifting over to the refrigerator and the coffee machine on the counter. If she just focused on the words for these things rather than the things themselves, her head was often busy enough to not remember the life she had been dragged away from when a powerful spell had pulled her to the here and now. Focused on the words, she almost didn’t remember that her sister was long dead, and she almost forgot to imagine how hard it would have been for her sister, taking over the role of druid after Aife had just vanished, and her knowledge with her.

Tears were rolling down Aife’s cheek, and she quickly brushed them away.

“You are a night owl,” Myrtis said from the entrance to the kitchen. His blue eyes caught some of the faint light, which also shimmered down the length of his straight, black hair. His dark face, unusually matched with the brightness of his eyes, was void of expression. Myrtis had approached silently, because there were very few things Myrtis didn’t do in complete silence. Aife had thought she’d gotten used to it several times, but then Myrtis had made her jump, and she’d realized that the vampire still had the better of her.

Aife wiped her face with her hand before she turned fully toward him. “What is night owl?” she said, carefully following the sounds she’d heard.

“A person who likes being up at night. The word has two parts, night and owl.” He added the word for owl in her native tongue, a tongue that had died as Myrtis had explained, just like everything else Aife had known. It lived only between her and the ancient vampire now, and Aife was learning to think in English.

“Night owl,” she said, tracing the feeling the word left in her mouth once more.

“Correct. Would you like some company, little night owl?” He stepped into the kitchen, though not in a way that felt oppressive. He also was no longer standing in the door, so if Aife wanted, she could just leave.

“I was crying, and you interrupted me,” Aife said, in her own language once more. With time, she had dropped some of the formality and was now addressing him as she might a friend.

The tall vampire’s bright eyes in his dark face shone as he took a step closer to Aife, though the fringe of his hair partially muted the intensity of his gaze tonight. Even without the silence and the vampiric strength, Myrtis was striking.

“I interrupted your crying in loneliness, Aife,” he said in that same, long-dead language, using a familiar address as well. “And I offer you my shoulder for all further tears you wish to shed.”

He got like that sometimes, and Aife wasn’t yet sure if she should send him off and tell him to keep his own company for presuming she desired his, or if she should just soak his beautiful clothing through with all her tears. She had never yet dared the latter, because the clothes of this age were all finespun stuff, finer than even the best weavers Aife knew could ever have hoped to produce. They were too fine for a simple druid like her, who had failed her people by leaving them, to suddenly own so many of them. Or that was what she told herself.

“Perhaps we can read a little,” Aife said, switching back to English. The way people lived now, the way they dressed… Yes, that was strange. It was downright foreign even, but reading fascinated Aife. The way a thought could jump from one head to the other through time and space by just those few lines on paper or even a screen -- that was magic, just like the kennings Aife had learned ever since she’d been big enough for her mother to teach her the magic. Reading brought a rush like divining from the bronze rods did, the ones Aife used to use for her scrying and fortune-telling. Except the words caught like ghost thoughts on the paper held a different fascination for her. She had loved and was loving every minute of learning the skill of reading and writing.

“Certainly,” Myrtis said. He stepped aside and held an arm out for her to walk ahead of him. He had explained to her this was respectful and a show of good manners, and Aife had wrestled down the unease. Myrtis was a vampire still, and she had grown up with warnings to be mindful of turning her back to someone like him.

They read in a small room with glass walls on three sides. Myrtis had told her that it was one of the many charming oddities of the house. It wasn’t a proper winter garden, because it was too small, he had explained. Myrtis had called it a slice of a winter garden. It was just big enough for the couch and plants in pots sitting on the tiled floor or hanging suspended from the ceiling.

Aife sat and pulled her legs up on the couch while Myrtis reached for a book from the pile on the floor at his side. He turned on the reading lamp behind them, and Aife blinked at the sudden brightness. When the bright spots cleared out of her vision, she found that Myrtis had stilled completely, his gaze focused on her.

“You remind me of someone sometimes.”

“Is that… good?” She had to ask, because Myrtis hardly bothered to let emotions show on his face.

“Yes,” he said after a pause, but didn’t elaborate. “Here. Somewhere Beneath the Stars. Not easy, but worth the effort.”