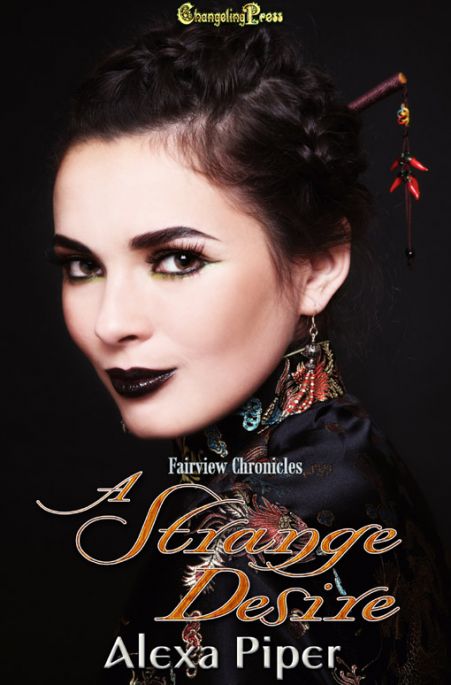 Cora, who has newly discovered she is a powerful mage, and her boyfriend and most notorious antihero and soul-eating greed-demon Valerian, travel to China, where Cora is supposed to learn everything there is to learn about being a mage.

Yet they have barely set foot on the ground when they attract unwanted attention. Jirou, fleeing from family obligations, is reeled in by the looks of the pretty couple. Bastien has much darker intentions: a long-held grudge against Valerian makes him want to steal Cora and make her his.

Figuring out why they have suddenly become a target halfway around the world leaves Cora and Valerian to discover all the strangeness of Beijing in this fast-paced tale of creatures, mages, and magic.

Cora and Asc had been chatting almost constantly throughout the drive to the airport while Valerian lounged in the back seat of Asc’s Toyota, imagining the pleasure of holding Cora close and having her all to himself. Since Valerian’s imagination was deep and wide and wicked, he felt pleasantly entertained.

“I am surprised you didn’t charter a jet,” Asc said, meeting Valerian’s eyes in the rearview mirror.

“Oh, Asc,” Valerian said. “I have a girlfriend for the first time in my existence, and I wish to parade her around, even if she was her usual obstinate self and insisted on wearing that less than flattering cardigan.”

That got Cora wonderfully riled and glaring back at Valerian with her magic-tinged blue eyes. “What am I, some prize horse?”

“Well, I do get to ride you,” Valerian said, enjoying himself when she narrowed her eyes at him.

Then she sighed and turned to Asc. “I did walk into that one, didn’t I?”

“I’m afraid you did,” the ophion said, his tongue tasting the air again. He slowed the car, pulled over. “Here we are.”

Excellent, Valerian thought, realizing he was looking forward to having his girlfriend all to himself for the duration of the journey. After he had paraded her around.

An airline attendant was waiting to take their luggage, and Valerian waved the man over while Asc and Cora were saying their goodbyes. A second airline attendant greeted Valerian with the art of the practiced smile and demure helpfulness that might have put even a mellona to shame, though the bee demons’ demureness could hide a nasty sting. Cora, busy hugging Asc, didn’t notice. It is a natural bond between ophions and mages indeed. I should count myself lucky she just waved at his snakes and didn’t insist on cuddling them like that.

He walked over to carefully detach Cora from Asc. “Witchling, if you could leave Asc alone? He should get back home swiftly. You see, cold-blooded as he is, he does not enjoy the weather.”

Cora wiped a tear from her eyes and drifted out of Asc’s embrace slowly.

“Did you have to make her cry?” Valerian said, turning to Asc, who clearly wanted to flick out his serpent’s tongue but didn’t with the humans around.

“You had better take good care of Cora,” Asc said, his golden-green eyes misting over.

He put his arm on the small of Cora’s back, following the two airline attendants who led the way to their private waiting area.

“There’s a butler?” Cora looked around the private lounge, wide-eyed.

Valerian chuckled. “It is the only reason flying commercial rather than hiring a private jet was an option.”

“I thought Asc was kidding about that.”

“Did you, really?” Oh, eyes wide as Cinderella’s just before she danced. I could watch you like that forever. Valerian made a mental note to surprise Cora, for her surprise and wonder were already beginning to take on the delightful flavor of a very special morsel, and Valerian was not satisfied by morsels. In fact, watching you makes me hungry.

The butler in question, Charles, male and pretty and with a tinge of Sri Lanka in his accent, approached them just then with two flutes of champagne. Cora took one, and so did Valerian. Their glasses sang, and Valerian sat on one of the designer couches while Cora walked around the room and stared her eyes out. Charles was standing in attendance in case she decided she needed anything. I would love to see you order the butler around, come to think of that. Yes, that would be lovely. Perhaps I should get one with whom you can practice.

“This is not the first-class experience I anticipated,” Cora proclaimed after rounding the room twice and dropping down next to Valerian to sip her champagne.

Valerian chuckled. “Well, if you are absolutely not satisfied, we can always take a private jet next time around.”

“Too good to be true? Like the white cream inside an Oreo cookie you love to lick?” He put his arm around Cora and drew her close so her scent filled his awareness, jasmine blossoms opening to the sun.

He sniffed her behind her ear, enjoyed the way it brought desire to her scent, then signaled the butler. “Charles, my bag.” And to Cora, “The only one I aim to spoil is you.” He kissed her, licked the taste of champagne from her lips, traced the minute roughness where those lips had been violently split earlier in the year by a pair of loups-garous, dipped his tongue inside her mouth when her head fell back. “I got you something,” he said finally, interrupting, because Charles was unlikely to enjoy watching if this went further.

Her eyes opened and focused on the book Valerian had pulled from his bag. “Millennium Brothers? You bought me a romance novel?” Cora said, focusing on the cover, which helpfully featured two naked male chests and a scantily dressed female one.

“Of course. I leafed through it and made sure it’s R-rated,” he said with a wicked grin.