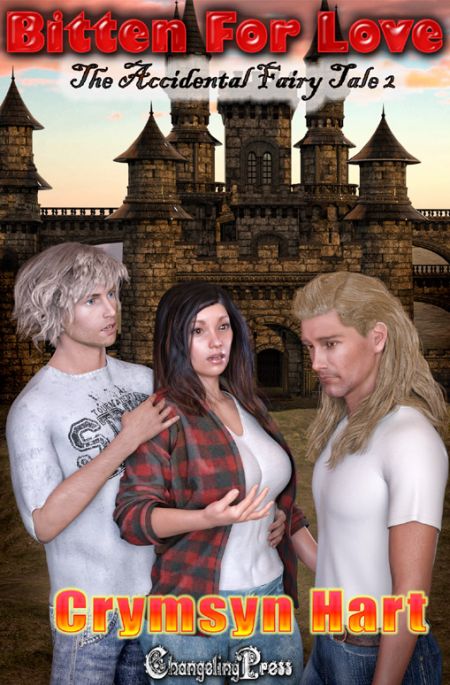 Jasmine thought falling into a magic book and landing in Oz with the Scarecrow, Micha, and Leon the Cowardly Lion was odd. However, getting sent to Dracula’s castle where she finds herself and her two men falling prey to the undead count even stranger. There they discover an unlikely ally who will help them save Micha from Dracula’s clutches.

Even as they venture deeper into the count’s castle, her feelings for both Leon and Micha deepen. Magic is growing within her thanks to the strange book which tells their story. Even with saving Micha’s very soul, the one most important thing they have to remember is keeping the book away from the evil Dorothy at all cost.

Jasmine landed on top of both Micha and Leon, a much softer arrival than she had when she entered Oz. The plant monster remained in Munchkinville. She and Micha had gotten away after he pushed her through his magic book. She rolled off the men quickly and double-checked to make sure everything worked. Micha wiped the grime from his jeans and shoved the book back into the bag slung across his shoulder. It was his most precious possession and the reason they were on the run. They couldn’t let the tome fall into the wrong hands.

Jasmine went over to him, but tripped and planted her hands directly onto Leon’s chest. A zing went through her when she touched Leon. She blushed and caught the slight flash of green energy connecting them. Leon gave her a small smile as he stepped away. The bags Micha had conjured for her and for himself landed next to them. She put her pack on her back and handed Micha’s knapsack to him.

“Thanks. How did these get here? I left them in the room,” Micha asked.

“Your guess is as good as mine. You’re the one with the magic book that has a mind of its own and a wand,” Jasmine replied. She plucked a few small pieces of dirt from her shirt.

“It’s not a wand. It’s a pen,” Micha commented through gritted teeth.

She held up her hands in surrender. “Sorry. You wave the pen around and light comes out of the end. My mistake if I thought it was a wand.” Jasmine tried to joke away her fear of where they had landed. “Has your pen recharged yet so you can write us out of danger?”

“Afraid I won’t be able to handle what’s coming next?” Micha snapped.

She sighed. “No. That’s not what I meant. Good grief. Somewhere in all this, things have gotten all tangled up. I want to know if you’re okay.” Jasmine touched his shoulder. The image of him being lifeless and barely breathing hung in her mind. Micha was her way home, back to the real world, and if he died Jasmine would be stuck in Oz. “You were whiter than a sheet the other night. Now you’re jumping through magic books once more. I wanted to be sure you were okay. Using your magic pen won’t drain the life out of you again, will it?”

Micha’s firm expression faltered, and his lips turned up into a smile. The same one she first saw when he asked her if she was okay after they took shelter in Dorothy’s house -- the one she’d dropped on the Wicked Witch of the East. He touched her hand and brushed his lips across hers. Her insides lit up and her stomach flip-flopped when she thought how she felt about him. “I’ll be okay. Everything’s changed in Oz. I had to channel my energy into the pen to get us to Glen-da’s. I used the last of what I had to heal your knee. I didn’t thank you for saving me, did I?”

“No, but how about saying we’re even? You saved me. I saved you. You finally figured out I’m not going to steal the book from you.”

“You still need to get home. You might decide to take it from me while I’m not looking.”

Jasmine crossed her arms over her chest and rolled her eyes. “After what’s happened between us, do you really think I’d leave you high and dry?”

Micha ran his hand over the bag containing the book. “I’ve seen stranger things happen. She might have woven you into our story, but you’re a wild card no matter what’s happened between us.”

“I thought we’d be over this, or you’d be over the idea I’m going to screw you after our con --”

“We’re not fighting,” they both replied. Jasmine glanced at Micha and laughed. The whole conversation sounded ridiculous.

“Micha, I’m not going to run away with the book. I promise. I want to know what she’s doing to me and what role I play with you two.” Jasmine poked him and tried to feel more confident in what she said. Truthfully, the idea scared her to death to think she played any kind of role in the messed-up story she found herself in, getting thrown into a magic book Micha was trying to keep away from Dorothy Gale from Kansas. All Jasmine knew was that Micha and Leon had been friends. Somehow, Dorothy took the place of the witch she killed. After Dorothy found Jasmine and Micha in Oz, they had to flee from the Emerald City. Micha used the book for her and Leon to escape to the new world they arrived in.

Where is here? Jasmine wondered. The air felt gritty along her skin. She caught the undertone of death on the breeze and the smell turned her stomach. Deep down, she was scared. Night surrounded them. Being stranded in another strange reality, where the rules were probably different from those in the universe she left, made it all the weirder. The worst was their journey was being handled by a book that had a mind of its own.