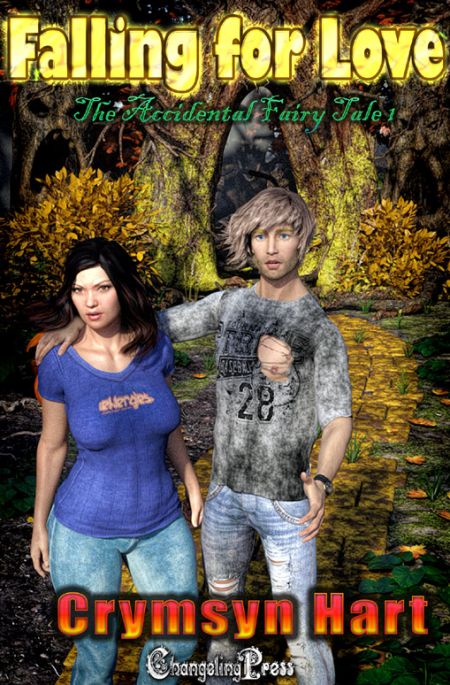 All Jasmine wanted was a quiet vacation. What she got turned into so much more than she could have ever imagined -- her own fairy tale. Micha Hook saves her from death by pushing her into the pages of his magic book. Jasmine finds herself in a land she never thought existed -- the Land of Oz.

However, in this magical kingdom, the Wicked Witch has been replaced. Books write themselves, and the magic is disappearing. While reuniting the old crew, Jasmine has to find out what’s happening in Oz before the magic is gone. All the while, she finds a handsome prince or two.

Praise for Falling for Love (The Accidental Fairy Tale 1)

"The idea of the book was interesting as it put a spin on a fairy tale I could never have imagined would be enthralling. I enjoyed the twists the author took and though I thought I knew the story, I soon learned not everything as it seems. If you like a story where every turn of the page keeps you seeking answers, then the writing of Ms. Hart and Accidental Fairy Tale is for you."

Jasmine stared up at the dark sky. The breeze pulled the remaining heat of the day toward the mountains and away from her campsite. It tugged at the staked lines she had pounded into the hard ground, trying to claim the shelter for itself. Even if the gust caught it, she wouldn’t blame the wind. This vacation had been planned for months. A whole week off was a dream because she didn’t have a backup at work. Jasmine needed time away from all the clients who called her for answers when she didn’t have them. The stress of it weighed on her.

In the middle of nowhere, silence greeted her, and she loved it. Half an hour from the nearest town, no lights polluted the view of the night sky. The illumination from her campfire relaxed her. I really have to do this more often. Jasmine let out a contented sigh and watched the vast expanse. Her gaze followed the three stars of Orion’s belt. Her grandmother had taught her about finding the shapes in the stars like the Big Dipper or Cassiopeia. Before she could locate another shape, a star broke the line of Orion’s belt. It sparked, seeming to bounce off the neighboring stars, before it divided into four separate trails. Each took a different path.

Her grandmother’s words filtered into her mind about making a wish upon a falling star. Jasmine closed her eyes and thought about what she wanted. Something to shake up her life a little. Maybe an adventure. Nothing too wild. Maybe a handsome man. The night greeted her when she opened her eyes -- the falling stars had already burnt out on the horizon. Jasmine felt a bit disappointed. Probably a satellite breaking up as it hit the atmosphere. Let’s be realistic. The world doesn’t revolve around fantastical events or strange creatures offering people three wishes.

Jasmine pushed her thoughts away as the haze of sleep settled over her. She studied the stars to see if another would plummet. When none shattered, she banked the fire and slipped into the tent to sleep the night away.

The next morning the stillness of the desert greeted her. Jasmine rubbed her eyes and pulled on her jeans. Her stomach growled. She’d left her food in the car. She went outside. Pieces of her camp chair were scattered around the campsite. The stones from her fire pit were knocked across the campsite as though someone had swept them aside. The seat of her chair lay near the tent. She picked the fabric up and examined the tears in it. It looked as though an animal had invaded her spot. But her tent remained untouched and nothing had woken her up. What the hell happened?

Jasmine’s hands shook as she cleaned up the mess before heading to her car. Her spot should have been safe. Nothing at the site looked like an animal had been there. Nonetheless, she’d camped on a distant part of her friend Landis’s land. Landis had left her the key to the house in case she wanted to get away from the elements. At the moment, she didn’t feel comfortable staying in her tent.

Jasmine grabbed her bag. She patted her pockets and felt the box of matches she’d shoved in there the night before and her keys underneath them. She went to open the car door when a flapping sound made her stop. The back quarter-panel on the driver’s side swayed in the breeze. What in the holy hell? The metal over the tire was flayed like a half-peeled orange. Long gouges clawed the top of her trunk. Jasmine pressed her fingers into the grooves. Each was three times as big as hers. Good thing I bought the insurance.

She glanced around for whatever had done this and prayed it hadn’t stuck around. A Gordian knot twisted in her stomach. She quickly took the tent down and threw everything from the site into the back of the car. Why didn’t it touch the tent? Her keys jangled in her shaking hand. I’m not waiting around to see if something comes back. What does it want? What is the rental company going to say? Jasmine turned her phone on, but it didn’t pick up a signal. This is what I get for wanting to be completely alone. Jasmine got into the car and drove to town, praying the creature was long gone.

Half an hour later, she arrived in the thriving metropolis of Shifting, Arizona, a booming town of a thousand people. She parked in front of a strip of stores and grabbed her phone. Fifteen voicemails popped up on her phone. The last five didn’t show the callback number. “What’s going on?”