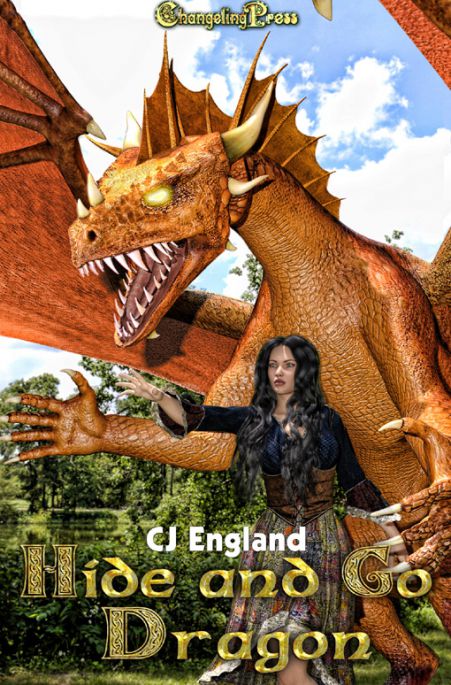 Ormr Jormungan, Beta Captain of the Drakehaven clan's security force, spends his days immersed in work and his nights endlessly singing the dragon's lament for his mate and newborn son, lost in a senseless car accident. But when he meets Magdeline Desilva at his clan leader's wedding, her quiet beauty and steadfast courage awaken a desire in him he'd thought long dead.

Magdeline barely survived the death of her husband, whose plane was shot down in Afghanistan. She has no intention of ever getting involved again, especially not with another warrior. Yet when she meets the dark, brooding Ormr, she is drawn to the dragon-man. His gentle protectiveness is a balm to her wounded spirit -- until she discovers what he does for his clan.

Ormr doesn't understand why Magdeline turns away from what they could have built together. When she calls for help to find her kidnapped daughter, all his protective instincts are aroused. As they battle the clock to find little Bettina, their attraction flares once more and threatens to consume them.

Confused and frightened, Magdeline decides to strike out on her own to find her daughter. But she doesn't understand a dragon always protects his treasures. And even though she may try and hide from him, Ormr now understands the magical truth of love, and he'll never give up seeking his forever mate.

It wasn't just the kiss, she realized. It was the guilt that sent her running into the dark. Ormr was the first man she'd kissed since her husband had been killed, and the fact she'd enjoyed it so deeply had remorse nipping hard at her heart.

Her darling Robert and the taciturn Ormr were so very different from each other. Robert, with his fallen-angel good looks and Irish charm could, with just a few words, sweet-talk a woman into doing anything he wanted. Tall and lean, with a swimmer's build, she could still remember how good he felt when they snuggled close. The strength of his arms as he held her. The feel of his hard body over hers in the dark of the night. She'd loved her husband with all her heart, but she had to admit she missed the sex just as much. When he was away on leave from the Royal Air Force, she and Robert had enjoyed a frequent and robust love life.

Maybe that was why she'd reacted to Ormr in such a way. Four years without a man's attention was a long time. She'd probably respond that way to any man who kissed her.

Okay... so that was ridiculous. Maggie knew she was a beautiful woman. She had no false modesty, and Ormr wasn't the first man to hit on her. But most of the men who did take that step backpedaled quickly when they heard about her daughter. That was, except for the ones who only wanted her for a few hours of impersonal, mindless sex. Those men were persistent, but never ever had she even kissed one of them, let alone thought of doing something more.

So why on earth had she responded to Ormr? A man she didn't even like.

She shook her head again. He was big and rough and just so... intimidating. He really did remind Maggie of a Viking. She could just picture him at the bow of one of those Norse longboats, his hazel eyes narrowed against the stormy wind as it sent his long blond hair dancing across his massive shoulders.

No slender physique on Ormr. He was built like a warrior of old, all broad chest and bulging arms. His thighs were big and muscular, and she blushed when she thought of what he would feel like leaning over her in bed.

God. She was going insane.

Which, again, was why she was wandering around in a shadowed forest rather than tucked up safely in bed. Because, for the first time in Maggie's life, if a man asked her to enjoy a few hours of stolen passion, she wasn't sure she wouldn't say yes.

Sighing at the incomprehensible way her life had just turned, she didn't notice the change in the forest. But then a shudder of awareness feathered over the nape of her neck, and abruptly Maggie came to a halt.

What was going on? Was it suddenly darker? Were the shadows... thicker? She sniffed the air and frowned. Was that smoke? Way out here in the trees? She shook her head. Drayce wouldn't be pleased if his woods were threatened. She'd heard he was insanely protective of his property.

She sniffed again, and getting what she hoped was a bearing on the strange odor, she hurried towards it. The scent grew stronger as she moved up the trail, but it didn't smell much like wood smoke anymore. More like... a lantern burning?

As she quickly made her way along the footpath, the air suddenly grew heavier around her. Almost before she realized it, she'd hunkered down and was staring into the darkened canopy above her. The insects and animals around her had gone absolutely quiet, and Maggie's mouth went dry. What was out there that scared even the wildest creatures of the forest?

Her question was answered when she felt, more than saw, the slow sweeping of enormous wings over the tops of the trees. She squinted up, trying to see what it was, all the while forcing herself to stay preternaturally still. Her primitive hindbrain kept telling her to run. Very fast and very far away. But at the same time she knew if she did so she would be drawing attention to herself, and whatever terrifying thing was out there wouldn't hesitate to make short work of her.

So she waited, barely breathing, her legs trembling with a fear she'd never quite before understood. And it wasn't until she heard the hesitant chirping of the crickets, and the soothing croak of the frogs in a nearby stream that she gave a huge sigh of relief and stiffly got to her feet.

"What on earth was that?" she muttered, glancing around nervously. She could almost pretend she'd invented the whole thing, but for the sick fear still churning in her stomach. No. There was no way could she have imagined anything so chilling.

Another deep breath told her the scent of fire hadn't been her imagination either. Determined not to cower a moment longer, Maggie turned and rushed towards her goal, her eyes nervously searching the darkness around her.

It only took a few minutes to get to where there was a lightening of the shadows. The trees didn't grow as thickly here, and as she drew closer, she saw they opened up into a large meadow. A meadow that at the moment was filled with wavering torches. And a lot of very excited, very nervous people.

"What is going on?" Maggie whispered to herself, curiosity dispelling any lingering fear. Instinctively she stopped just inside the shadows, gazing out at the crowd who, like her, had no business being out in the forest at night.

The torches made a large ring around the meadow, and it looked as if quite a few of the guests at the house party stood in that circle as well. Directly across the space, Maggie could see a worried looking Drayce standing next to Ryuu, who acted almost crazed, he was so upset. The bigger man was speaking urgently to his friend but Ryuu only snarled, a primitive sound that made Maggie shiver. His amber eyes were fixed on Lucina, who stood very close to where Maggie was hiding. She and Eadlin were also speaking in low serious tones, and by the tears in Eadlin's eyes, Maggie knew something was horribly wrong.

Then she stiffened when she saw Ormr stride up and touch Lucina's arm. A pang of something Maggie recognized as jealousy shot through her. Great. Another confusing emotion to add to the mix. Why should she care who Ormr touched? But she did.

She frowned when she noted that Ormr seemed as furious and upset as everyone else in the meadow. While there was a palpable sense of excitement and tension in the air, there was also a feeling of outrage and anger. And with the way everyone was looking at Ryuu and Lucina, Maggie was sure it had something to do with them.

And just why wasn't I invited? she thought. She was as close to Lucina and Eadlin as a sister. Why would they be in the forest without her? What was so secret they couldn't confide in her? A little hurt and a lot angry, she pushed away from the shadows of the trees, determined to make her way into the circle and find out.

But she didn't make it more than a couple of feet when that same overpowering heaviness filled the air. The creatures of the night -- this time including the humans standing in the meadow -- again went quiet and still. The shadows stretched longer, and the smell of smoke grew stronger, and Maggie knew instinctively it wasn't from the torches. She froze in her tracks, unable to move, and what she saw next made her very breath leave her body.

It was something out of a hundred old fantasy tales told by firelight. A creature straight from a Hollywood movie. A beautiful, terrifying beast that she'd thought lived only in nightmares.

It was a dragon.