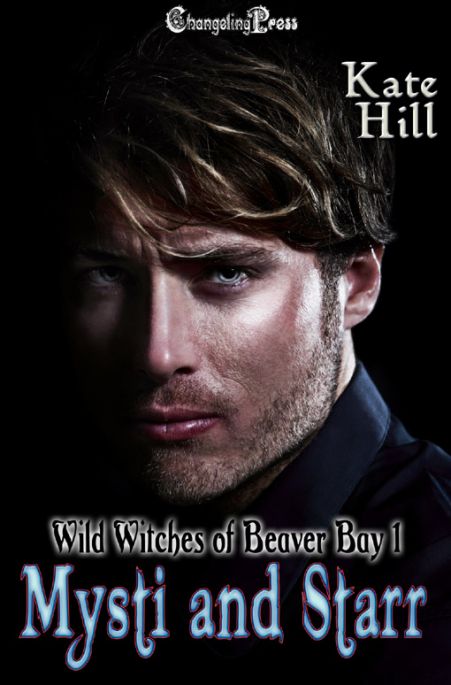 A blazing trail only he can see leads demon hunting biker Starr Johanson to his destined mate. A blessing placed on her family’s ancestral land summons Mysti Wild to the cabin where she’ll meet the man fated to share her life.

Each fears the other will be frightened by magic they don’t understand, but they quickly learn to trust each other, because no one can resist the person they were born to love.

Praise for Mysti and Starr (Wild Witches of Beaver Bay 1)

"I liked Mysti and her demon hunting mate and their sweet but steamy romance. A very entertaining story!"

"I really enjoyed this short story of Mysti and Starr's steamy romance. They are great characters and the story is well written."

The road Starr traveled wound along the tree-covered mountains. He had been riding for too long and felt almost lulled by the rhythm of the bike. By the look of the darkening sky, he’d need to find a place to camp soon, but he had a little longer to go. He was almost at his destination.

A flash of lightning in the distance prompted him to give the bike more gas. He finally pulled over and walked the bike down a narrow path into the woods. It didn’t look like a manmade path, but it was meant for him. The drizzling rain had turned into a downpour before he found a place to camp.

It wasn’t the first time he’d been alone in the middle of nowhere. Starr liked being on his own sometimes, but he rarely had time for that luxury.

The woods were nearly dark as night now, except for blinding flashes of lightning. Starr was thoroughly soaked from rain and had been nearly deafened by thunder. Storms always seemed worse in the mountains. He hurried to unpack his meager equipment.

Lightning flashed and a nearby tree crashed to the ground. Starr’s heart pounded and he backed away fast. That was too close for --

Starr slipped and tumbled down a rocky, leaf-strewn decline. For several seconds he could only grunt and try to roll with the fall. He landed on his stomach, the wind momentarily knocked out of him. He tasted blood and spat a mouthful while pushing himself to his hands and knees. From what he could tell, he had cuts and bruises, but no breaks.

Blinded by rain and wind, he glanced around, dazed. He started climbing up the slippery incline, but fell again. Maybe it was an optical illusion, but he thought a path led off to his left. Starr tried to calm his mind and listen for guidance. Instinct told him to try the path, illusion or not, and he had long ago learned to listen to his instincts.

He took a step and his ankle nearly buckled.

He pushed forward as quickly and carefully as he could with a sprained ankle.
Something too warm for rain trickled down the back of his neck. He swiped it and looked at his bloodstained hand. Rain pelted it, diluting the blood. Dragging his hand along his denim-clad thigh, he limped on.

Squinting through the storm, he noticed a clearing in the distance, surrounding a lake or bay.

That wasn’t a spirit voice, but human.

Starr turned and saw a woman approaching. She wore a yellow fisherman-style raincoat and hat that left half her face in shadow.

She approached and Starr hobbled toward her.

“Hi,” he said. When she tilted her amber gaze to his, Starr’s heart skipped a beat.
He smiled faintly.

Still staring at him, she swallowed and drew a deep breath through parted lips.
“We’d better get inside before we get struck or something,” she said, glancing around and jumping a bit when sheet lighting illuminated the woods.

“Inside where?” Starr demanded.

“My cabin. This way.” She left at a run and Starr hopped after her. Pain shot through his ankle and up his leg with every step.

The woman turned, looking frustrated, and ran back to him. “Sorry. You’re hurt. The cabin is right up there. Shit!” She jumped again when more lightning struck.

“Lean on me.” She stepped closer, wedging her firm little body against his and wrapping an arm snugly around his waist. He draped his arm over her shoulder and she said, “Let’s go.”

Hopping on one foot was easier with her to steady him. Before Starr knew it, they’d reached the cabin. It was warm from the fire burning in the living room hearth. To his right was a pantry and kitchen and to his left a wooden staircase leading to a loft.

“Come and sit,” she said, slipping away from him to remove her hat and coat and hang them on a nearby hook. “I’ll get my first aid kit.”

Starr took off his jacket and hung it on another hook before limping to the couch. It was soft and covered with a plaid quilt. Soaked and bleeding as he was, he’d mess it up.

“Why are you still standing?” she asked, approaching with towels and a first aid kit.
She was cute. No makeup. Big amber eyes. A longish nose and lips that he already wanted to kiss. Her dark, curly hair was tied in a loose bun on top of her head.

“I’m wet and bleeding,” Starr said, again reaching for the back of his neck where blood still trickled steadily.

“Which is why you need to sit your butt down. Now.”

She was sort of bossy, and that could be both fun and annoying. Starr did what she told him and asked, “What’s your name?”

It was almost stupid, that he didn’t know her name, but he knew she was meant for him.

“Mysti,” she said, snapping on plastic gloves and standing over him to inspect the back of his head. “And yours?”

She smiled. “Is that your real name?”

“I wasn’t trying to be a smartass. You have a nasty cut right behind your ear.” Mysti pressed a towel to the spot. “Hold that so I can check out your ankle.”

She’d yanked his boot off, shooting pain up his leg.

“Sorry,” Mysti said, placing his boot aside and gently touching his ankle. “This is seriously swollen. I’ve got ice. What happened to you?”

He curled his lip in annoyance and embarrassment. “I slipped on wet leaves and rolled down a hill.”

“Other than your ankle, do you think you broke anything or have a concussion?”

“My truck is parked around back. Do you think you need to go to the ER right now?”

More sheet lighting flashed outside the window across the room.

“Okay. When this storm passes I’ll take you to get checked out. Be right back with the ice.” Mysti stood, and Starr glanced after her, noting that she was small but curvy.

Despite being distracted by the storm and his ankle, Starr hadn’t missed how good she’d felt, pressed against him when she’d helped him back to the house.

He was pissed that he’d been injured for their introduction. So much for how he’d imagined them meeting -- maybe with him sweeping her off her feet and riding into the sunset with her on the back of his bike.

Sometimes Starr thought his family was right. He was a certifiable dreamer.

That was fine, though. It had gotten him this far.