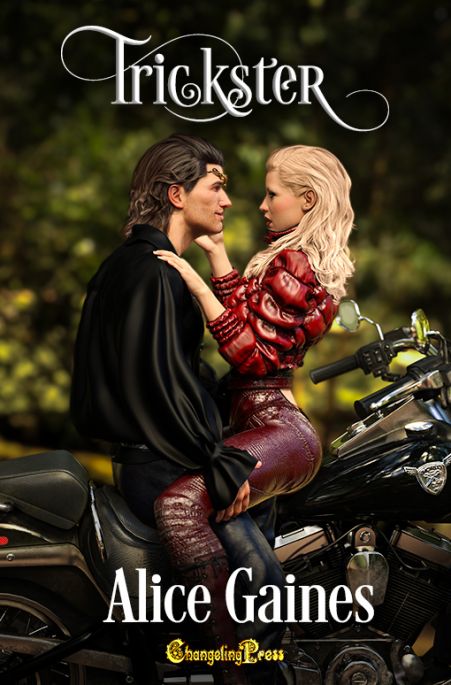 One night, after a particularly frustrating loss at her favorite game, SexScape, Grace finds herself whooshed away into a cottage belonging to one of SexScape’s most infuriating characters -- King Trickster. Only in the flesh, the king isn’t a squat little guy zipping around the game board on a toy motorcycle. He’s full-sized and eager to show her all the delights SexScape has to offer. He even drives a great big hog of a bike. Now she has to figure out how to get past League rules so she can stick around.

Trickster can feel in his bones that Grace is meant to be his partner, but first he has to convince her that everything here -- including the delicious sex -- is real. Then, she’ll have to prove herself worthy of entry into The League. Will they live sexily ever after?

"I thoroughly enjoyed reading this... It’s a girl meets boy romance and as the game is called SexScape … lots of sex.  The sex scenes are... smoking hot. The descriptions of Trickster wearing tight leather jeans and the obvious bulge are second to none. Trickster is a fun story that doesn’t take too long to read and delivers!"

Grace pounded her fist onto the tabletop hard enough to make her electronic tablet dance. Only one more move, and she could have gained entrance into the Seraglio of Studs -- a place where she could review an entire room of hot guys, all ready and eager to fuck her. In her imagination, of course. This was a game, after all.

She’d used her last move, damn it. She needed two more green tiles to finish, and a triangle of three of them sat right in the corner of the screen. Blinking at her. Trolling her, the little bastards.

She glanced at the clock. It read eleven twenty-three. She had work tomorrow and should have been in bed an hour ago if she wanted eight full hours of sleep. But she’d come so close in the game. She’d spent weeks on this level, 1023, and it was going to drive her fucking nuts if she didn’t win it. At least, she only had one life left before SexScape shut her down. Then, she’d have to go to bed, frustrated as all hell. She probably wouldn’t doze off for another hour.

As the tiles dropped down, she scanned the landscape and found lots and lots of green. She ought to get enough of them to win the level easily. To be sure of success, she sat and stared at the screen to spot the best moves.

Whoever had invented SexScape might have spied on her nighttime fantasy life. The artwork included lots of phallic images against a colorful background. Seriously, lots of them. Some were symbolic, requiring a bit of imagination to interpret. Others directly resembled… well… penises, and very nicely shaped ones. All arranged around soft, green grass where one could presumably lie comfortably to enjoy the sweet ministrations of said rigid cocks. Too bad you didn’t find that in the real world. She sighed. Maybe inside the Seraglio of Studs, all that satisfaction really existed, if she ever got there. Or maybe the game would get more graphic so she could at least witness an animated woman enjoying herself.

She mentally calculated where the most green tiles lurked, set her Screaming-O bomb off right in the middle of the cluster, and blasted away. The little suckers vaporized, getting her a third of the way toward her goal. Yes, she’d get it this time, and then she’d be able to sleep. Maybe one of those beautiful cocks would visit her in a dream.

With her fingertip, she slid tiles around, and the green ones fell like snowflakes. She’d found her rhythm, success zinging through her. This was why she’d downloaded SexScape -- the feeling she could conquer the world. That and the phallic symbols. Really, who had put this out on the Internet where kids could find it? From time to time, she glanced at the scoreboard to check on how many moves she had left. Ten, then seven, then five, then two. She hit the Tube-O-Lube so she could down another four tiles without the move counting.

Then, he showed up. The little bastard on his motorcycle -- a squat guy with a cape and crown. The game called him King Trickster. She called him King Chaos because he’d ruined more levels for her than she could count. Sure enough, he zipped around the screen, scattering the green tiles to the corners where she’d never get them. At times like this, she could swear she heard him laugh. And he’d ruined everything… again!

“Gah,” she shouted as she gave the tabletop more punishment. “I don’t believe it.”

“You take this too seriously, don’t you think?” a male voice said.

She jumped nearly a foot. “Who are you?”

Only, no one was there. She glanced all around but found nothing but her apartment. The voice had come from right next to her. Or rather, above her. No, more like all around her, as if it lived in the air.

“You didn’t make me up. You heard me with your own ears,” the voice said.

Still no one there. She sat without moving for several seconds. Total silence answered. No footsteps. No one else even breathing. She could ask the guy to show himself, but did she really want to see him? Or did she want to grab her phone and call the police.

Her tablet lit up, more brightly than usual. And pieces started moving without her touching the board. The green tiles all disappeared from the display, and her score totaled up at the top. She’d not only finished the level, but she’d scored three stars. Or someone had.

“There,” the voice said. “SexScape is all yours.”

Suddenly, darkness swamped her. But she didn’t only lose her vision. She also couldn’t feel anything. She was just floating, as though she’d fallen into one of those sensory deprivation tanks, or at least the way she’d always imagined them. Too fucking weird. Was this the entrance to the Seraglio? Surely, she wasn’t supposed to go through it for real. It was supposed to live in her tablet.

That was supposed to be reassuring? Some disembodied voice shows up in her living room, throws her into nothingness, and then tells her not to worry.

“As you guessed, this is the tunnel, the entrance to my world. We’re almost there.”