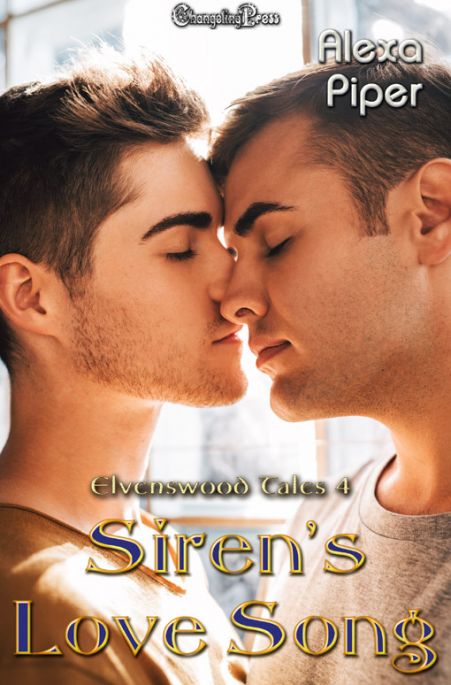 As a siren, Mike has a voice to sway a human heart. But he is a lawyer first, and when he meets a cute librarian, it’s Mike who is being swayed. Before the siren knows it, a chance meeting is turning into passionate love.

Corvin loves books and is passionate about being a librarian. When a tall, dark, and extremely handsome lawyer walks into his life, he is over the moon and in love. Yes, Mike likes humming and singing, and Mike’s boss is a little odd, but Corvin knows Mike loves him, and that is all that counts.

Mike has been keeping his siren nature a secret from Corvin, and with each passing day, with each step they take toward each other, telling the human he loves what Mike truly is becomes more difficult for Mike. Yet, when they are about to leave the city and take a beach vacation so Mike can work up the nerve to tell Corvin, a jealous necromancer ex shows up and tells Mike he wants him back. Now, Corvin needs to know what Mike really is. All Mike can do is hope that their love will be enough to make Corvin accept him as worlds and desires clash.

Mike had always thought that the background music the supermarket near New Elvenswood’s university campus spouted from the hidden speakers was about as cultured as a day-old piece of gum stuck to the sole of a smelly running shoe, yet here he was. Granted, he hadn't come for the music, but for the almost ridiculously wide selection of spices on offer. Specifically the cayenne pepper was the best and Mike’s reason for enduring the music. Two baggies of the stuff were already in Mike’s shopping basket.

Mike let his eyes wander over the various salts the market had in stock. They had anything from pink to black, from coarse to fine, and a part of Mike was wondering why he was even bothering with the fancy ones when he really just needed salt for cooking, for pasta water essentially. He sighed, scratched the back of his head, and picked out a pink variety, which went into his shopping basket to keep the cayenne pepper company.

I think pink salt from some mine somewhere on another continent just became the highlight of today. Mike thought back to the rest of the day, which he’d spent reviewing contracts for a selkie client.

Mike left the spice aisle behind and headed to the produce section. He enjoyed cooking, even after a long day, because something about preparing the food without hurry just made him relax. He liked cooking for friends as well but had never minded just doing it for himself. As he picked out bell peppers, Mike began to hum a low melody, which barely drowned out the ugly background music the store used to torture all shoppers.

Turning to the ginger root, Mike caught sight of another shopper, though he actually looked at the shopper only after he saw the man’s T-shirt. I am a DRAGON, look how I boar, it read, displaying a grumpy cartoon boar, half hidden by a pink dragon costume. That T-shirt was wonderfully ridiculous, and Mike found himself smiling.

The man who wore it under a neat black denim jacket didn’t notice. He was too engrossed with the pineapples, picking one up and giving it a critical look, then putting it down again and subjecting its neighbor to the same scrutiny. The whole thing looked, for lack of a better word, cute.

Mike cleared his throat, and the man looked from his pineapple to Mike. Dragon T-shirt had brilliant green eyes. “You want them just slightly soft when you squeeze the shell. Definitely not hard,” Mike told the other man.

“My mother told me not to trust men who have such strong opinions about pineapples,” Dragon T-shirt said. His blond hair fell over his eyebrows and almost tangled in his dark lashes, and Mike felt the sudden urge to brush those soft curls out of the way. Dragon T-shirt had a bubbly voice, a bit higher than Mike’s own, and with an excitable, bright echo to it.

Mike nodded thoughtfully. “I assure you, that was no opinion, just an observation.” He leaned over the pile of ginger root in front of him. “But if you care for my opinion, it’s the dragon fruit lovers who are all kinds of trouble.” He tilted his head. “Nice T-shirt, by the way.”

To Dragon T-shirt’s credit, he never looked down to his own T-shirt. “Thank you. I like a man who knows soaring fashion when he sees it.” He blinked, then held out the pineapple to Mike. “Check this for me.”

Mike took the offered fruit. It felt fine to him, but he still walked around the aisle until he stood next to Dragon T-shirt. Mike put the pineapple he’d been handed back down and picked out another, made a small show of examining it, and then handed that to Dragon T-shirt. “Here. This’ll be sweet.”

And Dragon T-shirt actually licked his bottom lip before he took the fruit from Mike. Their fingers brushed against each other’s, and Mike wanted to launch into a low hum at the contact, but he didn’t. Few supernaturals would willingly stick out like Dragon T-shirt, and so Mike had to assume this cute man with a hankering for pineapple was all human.