Mating the Triad (The Outcasts 1) 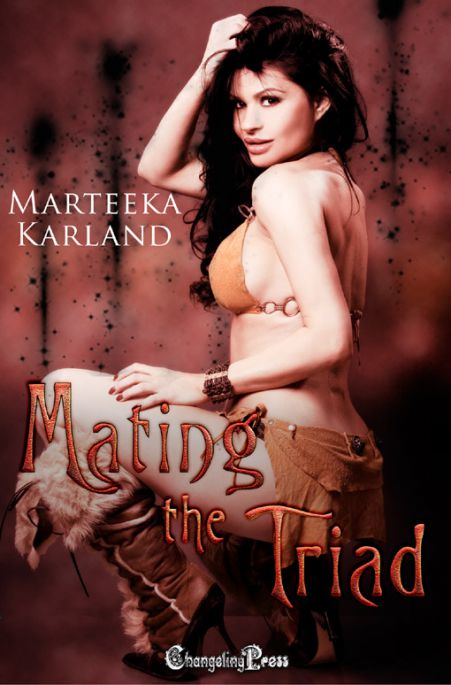 A thief on the run...
Exiled to the Outlands, Mia struggles to find shelter, food, and safety. Her aggressive style toward survival is what got her kicked out of the city in the first place, but in the Outlands, it means the difference between life and a very cruel death.

A triad in need of a mate...
Mia's sheer viciousness in defending herself catches the notice of one of the most powerful triads in the Outlands. Not only do they covet her body, but they're eager to tame the little hellcat. At least, that's what Mia believes.

How can such a strong woman submit?
Not one to simply be "taken care of," Mia refuses to be treated as anything other than an equal. Even in times of battle. How can she prove to three powerful warriors she's not only the one for them, but an asset in every aspect of their lives?

“Mia Cook. For the crime of theft from a noble house, your punishment is banishment to the Outlands.” The pious judge looked down at me from his throne. With a sneer, I spat in his general direction, expecting to get backhanded by one of several guards surrounding the dais. When nothing happened, I did it again for good measure. The judges always looked at us lowborns with contempt and superiority. I wanted to do some real lawbreaking. Like ripping off the guy’s nuts. With my teeth.

I didn’t resist when two guards dragged me to the center of the great room where court was held daily. Once an accused had been judged guilty, he or she stood in the ceremonial circle for all to see. Maybe it was me, but it seemed like they were just looking for reasons to banish any lowborns in the city. My crime? I’d stolen a bowl of bread. Granted, it wasn’t just any bowl of bread -- it was spoonbread. A Kentucky Outback delight. At least it had been back in the day. Earth hadn’t always been so medieval. There had been a time when whole festivals were dedicated to Kentucky spoonbread. Now, a dish like that was a delicacy, available only to the wealthy. Nobles. It was also my very favorite thing in the whole goddamned city.

Spoonbread is a “wet” bread dish made of cornmeal. You bake it, serve it with real butter, and eat it with a spoon. Like a pudding or custard, only not hardly as moist. In my opinion, the punishment was worth getting to eat the entire bowl -- which I had, fighting for the last spoonful after I’d been caught. Especially since it had been a couple of days since I’d had anything to eat. I knew when I stole it what my punishment would be if I were caught. But, honestly, you should try this shit. It’s worth the ordeal.

Which means the damned guards got to parade me through the whole of the middle- and low-born sections. Naked. After my little “spat” with the judge, I doubted I could conjure enough sympathy to get one of them to cover me with a cape until we got to the gate.

“You will be sent forth into the wildness beyond the walls of our hallowed city. Such is the way of all heathens. May the Heavenly Father in all his wisdom give you what you deserve in the Outland where He punishes all heathens.”

As the bastard spoke, the guards stripped the clothing from my body. When my outfit proved too difficult to remove easily, they simply cut the material, throwing everything into a great fire pit next to the circle. There was no way I could simply snag something on the way out to cover myself.

Just to be contrary, I stood proud, refusing to cover myself with my arms. Lifting my chin, I looked into the eyes of the man who’d passed judgment on me. He was old. Like really old. Thin hanks of long gray hair hung all over his head. His look was kind of comical since he was balding in places. If he’d been intelligent, he’d have cut it neatly, or simply shaved the shit off. What hair he had did little to cover the age-spotted skin. I knew my fucking with him was working when a most unbecoming blush splotched his already splotchy skin. Am I a bitch for loving the fact that he was old, ugly, and probably couldn’t get it up long enough to enjoy a woman? Probably a good thing. He was the kind of man to take advantage of his position.

As if he’d heard my thoughts, the judge leaned forward in his chair behind his desk. “The little bitch still has no respect for her betters. Why not show the little thief what she’s in for? Show her what happens to thieves who don’t learn their place.” An evil smile should have graced his less-than-perfect features, but, of course, the little bastard kept his pious expression firmly intact. How he managed that when he’d just ordered his guards to rape me was beyond my understanding.

He sat back, a small smile on his face. “I imagine you will. At least, in your dreams, between bouts of torture.”

One of the guards sneered, looking as if he’d been hoping for this development. A second guard muscled his way around the first one, growling a little. He was the clear Alpha there. No one challenged him as he took his place next to me, gripping my upper arm tightly. Obviously, he intended to be the one to carry out my extra punishment.

He was thickly muscled and stood over a head taller than me. His battle-scarred face seemed to match his body, if his heavily muscled arms were any indications. Scars crisscrossed his skin as if he had taken many blows. By not covering them as most men did, he signaled he was proud of his badges of honor. None in the guard challenged him. At present anyway.

As the guy pulled me closer to him, he whispered, “I’ll make this pleasurable for you if you’ll not fight. If you do, one of the others will challenge me. If they manage to take you, they won’t even try to be gentle, let alone give you pleasure.”

“So it’s either fight and get hurt or submit and not get hurt. Either way, I’m fucked. Literally.”

He fisted my hair, tilting my head back so I had to look up at him, then whispered for my ears alone even as he bared his teeth menacingly. His actions and expressions seemed more for the surrounding crowd -- and the judge -- than anything else. Despite the rough handling, he didn’t really hurt me. “You’re strong. You fought well when they took you. If I hadn’t been there, you might even have escaped.”

I remembered the bastard now. He had indeed been the one to capture me, wrapping his big, brawny arms around my slim body and squeezing until they were like a boa constrictor around me. Still, I’d fought until I’d passed out from lack of oxygen.

“You might fight them off again, but they’re not alone this time. If you can brave this with me, I’ll see to it you have some place to go in the Outlands. It may well be a hard life, but it will be life. If you’re good at sex, it can be very profitable.”

“Great,” I said sarcastically. “I’m going from a thief to a whore.”

“Better than from a thief to dead,” he bit out, clearly losing patience with me. “Consider this a test. Pass, and you will be rewarded. Fail, and the Outlands can have you. No simpering female can survive out there.”

“Fine,” I said, “but if you’re lying to me, know that I will find a way to come back and cut out your balls.”

He grunted in acknowledgement before turning me away from him so that his chest was at my back. “I believe you, little warrior.” He gripped my shoulders, yanking me back against him. His cock pressed against my lower back through his trousers. Impressive size…

“You know he’s only doing this because he can’t get it up himself. Right?” I wasn’t quiet with my jab, sneering at the judge as I spoke. If the increasing redness to his face and head was any indication, he’d definitely heard me. Well, that and the indignant sounding spluttering he made.

“Just so,” the guard said at my ear. “Why not show him what he’s missing? We’ll both get pleasure, he’ll be filled with longing and embarrassment, and you’ll get to live.”