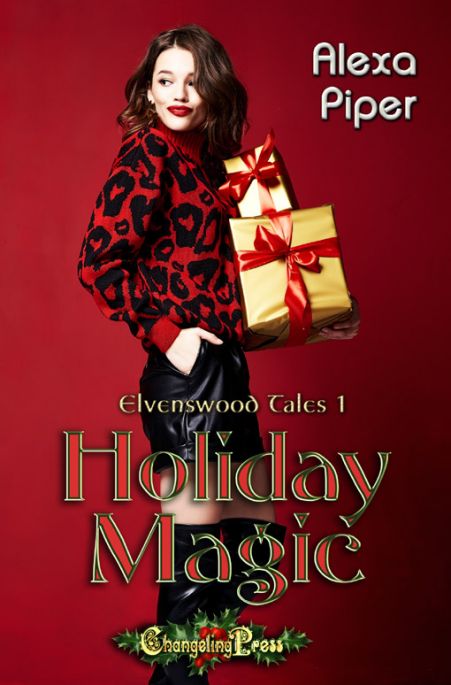 Charlie, the only non-witch in a family of witches, has resigned herself to the role of the black sheep who doesn’t fit in. She lives a normal, boring human life, interrupted only by the occasional family visit over the holidays.

But even a normal, boring human can run into a vampire. Hugo might just be the caring, protective, blood-drinking boyfriend Charlie never knew she needed, even if her family will disapprove.

Before Charlie and Hugo can even go on a proper date, Fae try to ruin Christmas, and Charlie finds herself confronted with her vampire boyfriend’s very hot Elven friend. The three of them will have to take a trip to Faerie to save Christmas before they can figure out who gets to kiss whom first.

"...there’s nothing average about this world. Witches, elves and vampires live here too. That puts a nice spin on things. Now the vampire, the human and the elf have to save Christmas. That includes a heavy attraction between all three. There’s a lot of steam toward the end of the book with a m/m/f scene that I really enjoyed."

"...162 pages of naughty magical holiday fun filled with witches, vampires, elves, and fae. AND, it's the first in a series! I recommend this romantic holiday comedy filled with LOL moments, other-worldly venues, and intriguing copulations."

Charlie pulled on the neckline of her Thanksgiving dress, a dress she knew looked good on her, a dress that should make her feel good. Its failure to do that this Thanksgiving was due to an issue no dress could fix. I hate dresses, she thought. I hate wearing dresses while visiting home. The dress really wasn’t to blame for Charlie’s discomfort. She had tried it on before she bought it, and the knee-length dark copper sheath fit perfectly. Had she been going anywhere else, it would have made her feel confident, but Charlie was going home.

The tram was climbing the part of New Elvenswood that had spread out over the sloping hills to the northeast. New Elvenswooders called it the Hills, Hillside, or even Upside. The valley, on the other hand, was usually just the Valley.

Charlie looked out the tram’s window. The November sky was hidden behind a lace-like veil of fog that gave the world a magical look. It pulled her mind toward fairy tales, toward Fair Folk on iridescent wings that made the holiday forests come to life with light and icy ornaments. Charlie looked away, looked down to the casserole of caramelized pears she had prepared for the Thanksgiving dinner. Magical. Though not for her.

Charlie had tried to worm her way out of spending Thanksgiving at her parents’ house, but her father and her mother had mounted a combined assault on their youngest daughter strong enough to render any lie of prior plans null and void. They had appealed to her emotions.

We hardly get to see you anymore, and you live just down in the Valley, her mother had said. You never come visit.

I’m almost done restoring that cabinet finally, and you promised you would help me, remember? Let’s do that over the weekend, her father had said.

In the end, Charlie had caved and agreed to come home for Thanksgiving dinner. She had determinedly not brought an overnight bag because she had no wish at all to stay the night, let alone the weekend, and spend it in her old room, her old bed, feeling like she had when she still lived at her parents’ house.

Charlie put the casserole down in the empty seat next to hers, fussed with her scarf and the suddenly itchy and too tight dress under it. Mom and Dad never make the twins feel that guilty, and they actually moved out of town.

The tram was almost empty, and Charlie got off at one of the last stops on this line, Oak Eaves. She readjusted her scarf again, pulled on her gloves, and stepped out of the warmth of public transport into the icy November air. It had started snowing just a couple of days ago, and here on the Hills, there was still a good amount more snow than back down in the Valley. Charlie crunched her way through the whiteness as the tram started speeding away past her. Her sighs turned into icy clouds.

Charlie turned, and stared. “Ah, my pears!” One of the other passengers had her casserole dish in hand and was walking up to her.

“Sorry -- you left this on the tram,” he said, and handed her the dish.

“Oh, thank you. You just saved me from embarrassing myself.” She looked after the tram, which was moving farther up the Hills. “Was this your stop?”

He had no cap on, no gloves either. His hair was dark and thick, already catching snowflakes like icing sugar, and there was laughter in his eyes. “No, not quite. But I’m afraid I had to get off to catch your attention.” He grinned. “Your mind seemed elsewhere.”

“I’m really sorry. The next tram is in ten minutes --”

“No worries,” he shrugged. “It was just the one stop, and I don’t mind the walk. Are you going this way as well?” He pointed along Oak Eaves, and Charlie nodded. “May I accompany you?”

“Uhm, sure. I mean, really, I owe you. For the pears. And for saving me from becoming tonight’s running joke.” She fell in step next to him.

“I can’t believe that. At worst, this makes a good story. Unless this --” He pointed at the casserole. “-- is the highlight of the feast.”

Charlie laughed. “Oh, hardly. But it is the centerpiece of general criticism. I’m headed for my parents’ house, you see.”

“That’s right,” Charlie said, sighing out more icy breath. The man’s eyes were intense, in a good way, and she enjoyed them on her. “So are you visiting family as well?”

He looked right to where the Hills fell away to reveal the Valley, though today, that part of New Elvenswood was wrapped in fog. “I’m afraid I have none left to visit, but I am visiting a friend.”

“Oh, I’m so sorry, I didn’t mean to come across as insensitive.” Shoot, that was rude of me. And he seems like a really nice guy.

He looked back at her, blue eyes like the sky that was missing from the day. “That’s all right. It’s not like you could have known. And it was a long time ago.” He shrugged. “The present is still here to be lived.”