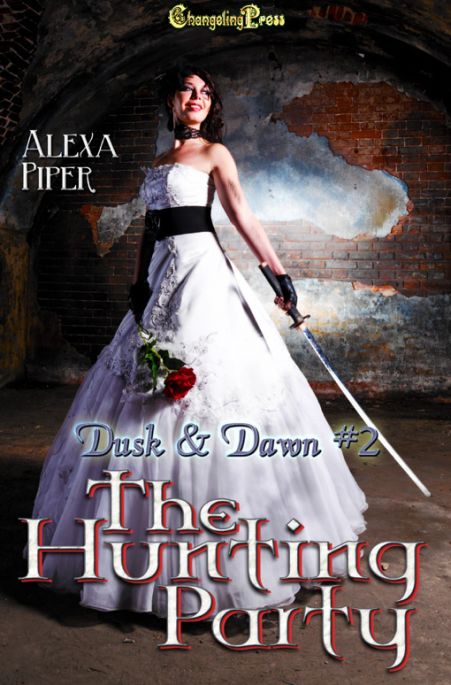 Maxim would love nothing more than to marry the woman he loves, in peace and without distractions, but a series of uncanny murders in the hunter’s city demands his attention.

Meanwhile, Heath is excited to plan Maxim’s and Robyn’s wedding. While he does that, he will have to learn to make time for his own budding relationship with Brian.

When Robyn’s bachelorette party ends in more murder, no one is happy. Yet all are willing to combine their efforts to end the bloodshed for good, so the wedding can be had, along with a happily-ever-after.

"A new romance, marriage and murder… how can they ever find their happy ending?... this book had a great pace. It was a good balance of action, intrigue and romance. ​I really enjoyed The Hunting Party!"

"...a well written paranormal romance story, a story that kept me turning pages. I want to read the next book. I enjoyed reading about Maxim, and Robyn’s wedding plans."

"Planning a wedding around a dealing with a series of gruesome murders is one thing. Dealing with a comedy of errors at the same time can be truly grisly."

"This is such a different type of series. I love it. It predisposes that vampires and other supernatural types had come out to the world a long time ago. The characters, both good and bad, are all interesting and the plot does not just depend on action to keep things going. The use of language is particularly great in this series..."

Brian had tried for so long, had made so very certain that nothing was ever amiss where Heath was concerned. No bouquet of flowers ever wilted in the vases Brian regularly put in Heath’s apartment, no cleaning chore was left unattended by the staff, no message taken and forgotten. Brian had even seen to it that the people Heath brought home -- if the dhampire did indeed choose to bring a person home -- were treated courteously or turned away at the door when they came back to call on Heath, and they did. Entirely too many for Brian’s taste had returned to try and win Heath’s heart.

But of course it was understandable. Heath’s eyes were a delight of dark blue, the hues of two sapphires fit for the altar or the temple crown of a shrine maiden. Heath’s eyes made Brian dream of sacrificial fires and their soothing smoke. And in Morgan’s, not at all that far into their second date, Brian found himself considering flames and heat and many a smoldering thing he and Heath could do.

“So we are really trying this?” Heath’s voice pulled Brian out of the imagined flames and back into their conversation.

Brian smiled at the dhampire, who looked like he was trying to work out a riddle in his head, not like he was on a date. Brian reached for Heath’s hand across the table. “We are really trying this. And I know you need your space, so don’t worry about that.”

Oh, Brian did know about Heath’s need for space. After all, Brian had spent years trying to invade that space in increments. But now that he was being offered it, the Lar swore to the heat of prayer that he would cherish every square, every breath, every nook that made up that space that was Heath.

Brian was also more than a little aware that Robyn, or Y Robyn as Maxim preferred to call her, had been the one to give Heath the push he needed, and Brian was grateful. And on top of being a welcome help with winning Heath, Robyn had moved in and offered offerings.

“Okay, then,” Heath said. “We’re trying this.” The dhampire reaffirmed his words with a nod. A moment later, his eyes drifted to the distance over Brian’s left shoulder before he began to fidget with the little pot of yellow pansies at the center of their table.

“Are you thinking about how to fit a relationship into your calendar?” Brian asked.

That made Heath cringe a tiny bit, and in cringing, he laced his fingers with Brian’s, finally, and looked back into the Lar’s eyes. “No? Well, yes, but it wasn’t the topmost concern. But it’s a consideration, of course. I wouldn’t want to not make time. Making time is important.”

And that warmed Brian’s face. “You’re important,” he said.

Before Heath could pull his jaw back up or respond, a noise from the bar to their right broke the moment.

“Oh, what the fuck?” Heath said, turned his head and narrowed his eyes.

Brian stretched his own senses, but nothing seemed wrong with Ruthaven 43 in spite of the noise. If anything, the building felt extraordinarily cheerful to Brian.

“Yeah. You have got to be kidding me,” Heath said. He stood, walked over to the bar, pulled his upper body on it so he could look over. Out of curiosity, Brian followed suit.

“What the fuck are you two clowns doing behind the bar?” Heath said.

Robyn and Maxim were huddled under the bar, and Brian recognized they were having a moment. The Lar had seen such things before and could recognize when time slowed just a fraction, when the light brightened just an increment, when the air grew lighter and sweeter. He smiled.

“Marry me,” Maxim said, reinforcing Brian’s assessment of the situation.

Robyn stared. She looked back and forth between Maxim and Heath while Brian felt barely able to contain his elation. They are getting married! A wedding, here, between Maxim and Robyn! Naturally, she had to say the words, and it was clear she was having trouble with that.

Brian wanted to rush off and fetch her chrysanthemums. He found those were ever calming and good for clearing the mind.

Before the Lar could move a muscle, Heath spoke, steady and perfect. “You had to go and break him, didn’t you?” the dhampire said. “You break it, you keep it, Robyn. Now, don’t let my dad wait to hear you say it.”

And that seemed to work on Robyn just as well as the chrysanthemums would have, because Brian watched in wonderment at her eyes catching fire, at the flowers blooming in her cheeks. “Yes. Oh, yes, yes, yes,” she said.

Maxim and Robyn naturally sank into the depths of a kiss after that. Brian wished them bliss, swore that he would do whatever he could do to guard that bliss. First and foremost, he would never ever again let Robyn take the subway.

“Heath,” Brian said, reached for Heath’s wrist, and spun the dhampire toward him. “Kiss me.”